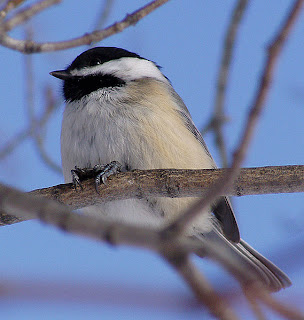 I was awakened by the feebee of the chickadee this morning, starting very early. Actually, the chickadee roused me from a drowsing state after my first wake-up call at 4:30, from thirst? first day of school worry? Nothing to worry about: daughter had set her own alarm, is off for a short first day, followed by end-of-summer socializing, then back to school for volleyball practice, and all is well.

My husband, once a coach at her school (but a teacher applied, so...sigh...) went to the mandatory parents meeting for volleyball, finding out what it's like to be a volleyball parent (previously my job), and I went off to book group on a pontoon boat! (But he signed us both up to work volleyball concessions!)

We discussed The Yiddish Policemen's Union, by Michael Chabon, that funny, moving, re-imagined "history" novel, pursuing the "what if?" of Alaska as a Jewish settlement territory after World War II. My mother remembers the actual proposal, by Harold Ickes, which did not fly. In the novel, the characters are all on the brink of Reversion, and another dispersal into the world, when Alaska will be returned to...Alaskans.

This one would make a good movie, I'm sure. I enjoyed the subtle hilarity of language in it, and some of that is in the dialogue, so it would be present in the movie version, and the intricacy of plot. Not just the hardboiled detective plot, but the ongoing political/human conflict plot. The "red heifer" plot. Crazy apocalyptic thinking.

I was moved by the messianic character. And intrigued by the "bad guy" who says/writes: Every Messiah fails the moment he tries to redeem himself

Meanwhile, the SOBs, that self-titled men's book group, who should try The Yiddish Policemen's Union if they haven't read it already, are reading No Country for Old Men, by Cormac McCarthy. My dad, who used to say "my little chickadee" to me in a W.C. Fields voice, was scared by the film version of No Country for Old Men. 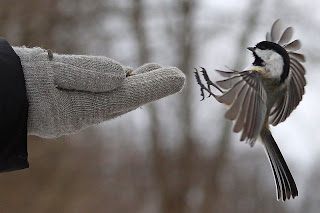 And here is a gloved hand that might belong to an old man, feeding a chickadee.

Thanks to Wikimedia for the photos, with full credits at these links: chickadee on branch by Danielle Langlois and chickadee landing-on-hand from flickr.
Posted by Kathleen at 8:19 AM

Chickadees are so unbearably cute. As I recall, they are the state bird of Maine, which is why I picked Maine to do a report on in 4th grade....

Incredible image of the gloved hand and chickadee.

I know! Amazing photo! I'm so glad the photographer is willing to share it.

It would be fun to read your 4th-grade report, Hannah!

This Wikipedian (Wikipedia editor) is glad you are using Wikimedia pictures!

I was scared by the book that begat the movie that scared your dad...no one swallowed a fly I hope!

Haven't read that Chabon yet, and am too scared to read McCarthy's darker stuff.

I, too, am scared of McCarthy, based on what others have said, though I read/saw The Road and lived through it.

At work, we used to listen to the Jimmy Durante station on Pandora, Collagemama!

If you made it through the Road, you're probably ready for anything.

OK. The Road was heartbreaking, human, and honest. Seemed to me too awfully possible, based on what we do and say to one another now. I found the boy a hopeful character.

I haven't read it, but it's the too awfully possible part that would have scared me.

That is scary...but strangely hopeful. Really. Not everybody feels that way. But I always find the hope, if there is any.

That's one of the things I like about you, Kathleen.

Thank you, Seana. And there is so much to like about you!