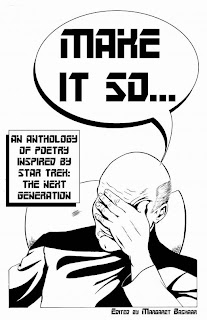 Make It So... is out! It was scheduled for June 16, Captain Picard Day, but came out July 16, so the water could really come to a boil for the Earl Grey Tea!

I hope it is OK to quote this very short poem in full to give you a little taste of the humor and fun in this anthology of poems inspired by Star Trek: The Next Generation, edited by Margaret Bashaar, and published by Prime Directive Press, an imprint of Hyacinth Girl Press.

When ordering tea, I like to say
"Tea, Earl Grey. Hot"
to see if the barista cracks a smile
or not.

Yes, there is a poem by me in this, and poems by many other poet/Star Trek fans, including Susan Slaviero of Cyborgia!

As almost every day of my life now is a synchronicity jam or a Random Coinciday, I have to mention that in the waiting room this morning (ultrasound, nothing to do with pregnancy) I picked up a copy of Time (Future of Fish cover) with an article about fan fiction in it, and, of course, there was plenty about Star Trek (all generations).

I wanted to be sure and celebrate Make It So... here, especially after complaining a bit lately about science fiction writer Cordwainer Smith and his odd anti-feminism.

But geeze, he comes down hard on his character Dolores Oh in "The Burning of the Brain." On the other hand, the whole story might be a criticism of a certain state of mind and culture, as these stories span thousands and thousands of imagined years. So, more on that tomorrow, perhaps.
Posted by Kathleen at 11:04 AM

Looks like a fun anthology. Congrats on your inclusion.

Congrats! Great to see Margaret Bashaar's project. What a concept. I liked Star Trek but never was a real trekkie. I got as far as "He's dead, Jim." If it was on at the same time as Little House on the Prairie, the INgalls won out.

Congrats on the publication! Just ordered a copy for my hubby, a huge Star Trek fan who also happens to love a poet. :)

Your hubby might be able to read the poem in Klingon then, yes?