On Easter Sunday, Pastor Bob spoke of Salome as being one of the women who fled the tomb, afraid, after seeing that the stone had been rolled away and Jesus was gone. I asked if this was the same Salome who had asked for the head of John the Baptist on a plate.
Since Jesus and John the Baptist were contemporaries, this didn’t seem too far-fetched for me, and it led me on a riff about repentance.*
Bob didn’t know, and both of us were intrigued. So I have taken it upon myself to find out. The short answer is no--thanks, of course, to Wikipedia. The real answer, as usual, is a bit more complicated and stickier to find out, partly because a lot of people have the same names and partly because some history is really legend.
Along the way, I learned that Jesus had a sister named Salome. And that this would be a weird Random Coinciday in the blog.
I admitted to Bob that I mainly know Salome from the Dance of the Seven Veils. That is, I often get my religion through literature, in this case Oscar Wilde’s play, Salome, and the operas and cultural depictions since of Salome as a femme fatale.
Salome danced for Herod at his request, and he offered her whatever she wanted in return. In some fictional accounts, she wants John’s head because she desires him and he spurned her advances, or she wants to impress another potential (sophist) lover. Ew. That guy is not impressed by the head and goes back to Plato.
In a Biblical account, Salome’s mother tells her to ask for John’s head, because the mom is mad at John for saying her marriage to Herod, her first husband’s brother, is unlawful; she divorced her first husband to remarry. Yes, this is the same Herod whose actions led to the death of Jesus. And this Herod is the son of “Herod the Great,” the King Herod associated with the massacre of the innocents (children under two when Jesus was a child), but apparently he really just massacred his own family, pretty common among dictators of the past, alas, in various cultures, including Cleopatra’s.**
And in an apocryphal version, it’s not John’s head but Herod (the Great?)’s daughter Herodias’s head (did all these people marry their brothers and sisters? oh, um, yes, re: Cleopatra and various mythical gods and goddesses responsible for the creation of the world), and she was playing on the ice, fell through, and her head remained on the ice, which reminds me of stuff in the Jane Campion film, In the Cut.***
*If Salome, after asking for the head of John the Baptist, repented and became a follower or disciple of Jesus, present at the crucifixion and at the resurrection, then, wow, cool. Alas, it is a different person.
But my insight still holds: we can only repent of what wrong we ourselves have done, not wrong done to us. Only the perpetrator of that wrong or harm can repent of that.  Unfortunately, we often take on the shame and blame for the harm done to us because the wrongdoer is neither willing nor able to do so, and society, too scared to go after the wrongdoer, or finding that too difficult to do, joins in, piling shame and blame on the victim, the one who has been damaged.
This is not a new insight. And it certainly happens. What intrigued me was the thought that Salome, who had done wrong, even if urged unto it by her mother, might have repented and spent the rest of her life doing good. Nope.
**random coincidence
***random coincidence starring Meg Ryan and Mark Ruffalo, involving ice skating and a “disambiguated” head. In Wikipedia, disambiguation means separating one use/meaning of a word from another (to avoid ambiguity). In In the Cut, it means separating a head from the body, in police jargon. This is pertinent because Meg Ryan’s character, a poet, who reads short poems on public transit intermittently throughout the film, is researching word meaning, specifically slang. Oh, wait, no! It's a "disarticulated" head, not a "disambiguated" head, but that's still about language, speech, words, meaning. And, boy, did my origami brain enjoy that brief misapprehension.

Have I mentioned how much I love Mark Ruffalo (rhymes with “buffalo”)? 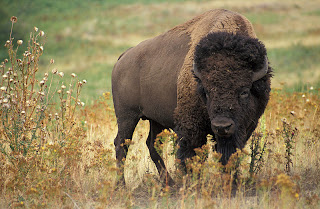 Salome art by Titian, Gustave Moreau, and Aubrey Beards-ley.
Buffalo thanks to the United States Department of Agriculture.
Posted by Kathleen at 12:32 PM

Nene, because I love Wikipedia! And because this is a blog, not a research paper. I like to go to Wikipedia first for an overview & if I am doing serious writing, I need to check everything out. But this is a personal blog. And Wikipedia is in an ongoing process of checking everything out. And the highly respected Oxford dictionary was partly written by a guy in an asylum for the criminally insane.

And speaking of disarticulated but on the other hand very articulate heads and Easter, I got together with most of my family at my mom's old house in Carmel this Easter. My oldest nephew, who is in college in Washington DC, couldn't make it this Easter. So we Skyped him. Then we wanted to show him some improvements we'd made to the garden, so we carried around his disembodied head to show him. It worked out sort of. I guess people have these experiences all the time now. To me, as a first timer, it was both weird and funny.

Oh, Seana, you have made it a perfect Random Coinciday!

Well, I didn't make it so, but I am happy to have participated in it.

I was not totally disavowing the utility o Wikipedia nor in any way questioning or disparaging your knowledge or depth of research you always pursue facts and truth. Not yourself but their are those who use it without due diligence.

Brought it up just so that I could get your opinion and with great respect for your erudite opinion.

No prob, Nene! And I am cheerfully warning readers that my daily blog is not scholarly!!

I enjoyed this after having my own memory lane about Salome in the next post. And I have also been interested in disambiguation after reading it at wiki. Fun stuff!

I'm glad you enjoyed this, Ruth, and the other disarticulated head, too!

Whoa. I had not realized there were this many references to Salomé (I was only familiar with the biblical and Oscar Wilde versions).

And, yes, she certain does make a good slattern for Slattern-day. ;)