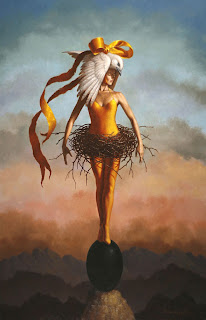 Extra post because I love this painting by Steven Kenny and these poems by Ron Hardy!  Check out the Ron Hardy poetry feature at Escape Into Life, a fabulous online art and culture magazine!

Then click around on the other fine art, essays, poetry and prose features there.

An excerpt from "Ghost Deer" by Ron Hardy:

A little light was left,
enough for the ghost deer.
We stood by the fallow
corn field, she and I,
listening until they appeared,
blinking, two, four, then seven
or eight, then fewer, finally just
the color of evening, muted, stretched.

Other cool stuff:
--silvery hummingbird in my own back yard!
--lovely comment by Harlow Flick after this post, including "Bluebird" by Charles Bukowski
--Shweeb (us up in the air in tubes, silvery hummingbirds ourselves!)
--NPR Morning Edition on Shweeb, which plays The Jetsons music at the end, allowing you to hear how The Simpsons theme song is a tribute to it!
--goldfinches in the trees as the leaves turn yellow!
--watching the cardinals and squirrels eat red berries in the pine!
Posted by Kathleen at 6:59 PM

I appear to have left off the ! after Charles Bukowski, who probably didn't like !!, anyway!