A Rather Elaborate Kimono 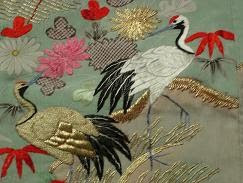 Day 214 of the "What are you reading, and why?" project, and Michael, who was taking my measurements in the cemetery, told me he was reading a book called The Trouble with Life is Someday You Die, but I could not find that book by Googling, so perhaps he was reading How We Live and Why We Die, by Lewis Wolpert, subtitled The Secret Lives of Cells.

Anybody can correct me if I'm wrong!

Michael described the book as full of "factoids" about life that show how we are going along, since the moment we are born, programmed to die.  One of the freakiest factoids is that, with medical advances and stem cell research, it's possible there are people alive today who will still be alive in 400 years!

Michael doesn't want to be here to see that. And probably won't be.

Why, you might ask, was a man taking your measurements in a cemetery?

Well, I might answer, this year for the annual cemetery walk in Evergreen Cemetery, Bloomington, Illinois, where Dorothy Gage (the Dorothy Gale of The Wizard of Oz) and Old Hoss Radbourn (of Fifty-Nine in '84) are buried, along with the Adlai Stevenson family, I will be playing Helen Davis Stevenson, Adlai's mom, and Michael is the costumer as well as an actor this year.

In the Wonderful Land of CoincidOz, I see that a movie might be in the works based on the book by Ed Achorn, subtitled Old Hoss Radbourn, Barehanded Baseball, and the Greatest Season a Pitcher Ever Had, mentioned earlier in this book blog!

Additional coincidii: the name "Lewis," as Helen Davis married Lewis Stevenson, who was always "on the wing," off taking the cure.  There is a picture of Lewis Stevenson in a rather elaborate kimono that suggests a few things about that marriage.

Wikipedia tells me that Adlai Stevenson is referenced in two episodes of The Simpsons, "Lisa the Iconoclast" (the one about the real Jebediah Springfield) and "The Secret War of Lisa Simpson" (the one about hazing at military school) and Adlai Stevenson II is indeed just the kind of witty intelligent true statesman that Lisa would idolize.

Adlai, known as "Laddie" by his mom, acted in plays in school. McLean Stevenson, the actor from M*A*S*H, whose character famously died in on his plane home from the Korean War to his beloved Bloomington, Illinois, is a cousin of the famous political family.

There are more coincidii, but my brain is folding unto death...

I will not be wearing a kimono.

The kimono you see here--a detail of two cranes--is found in the Special Collections of the W. Frank Steely Library of Northern Kentucky University.
Posted by Kathleen at 12:56 PM