My Brain is Origami 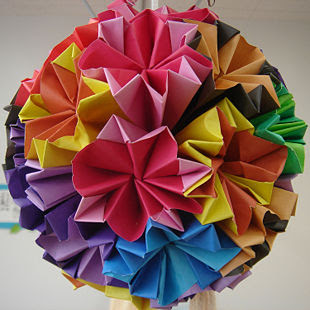 Day 209 of the "What are you reading, and why?" project, and today book recommendations came in the comments on yesterday's entry--please read them for more detail--and I came across what a character is reading in a book I am reading, so my brain is origami.

Plus, I discovered a new website, with panspermia on it (which contains life not seen on earth). What the Heck! (Stuff to Talk About at Work When You Are Not Working). (I am not at work, and I am not working.)

So my brain is even further folded.

Ron is reading The Brief History of the Dead, by Kevin Brockmeier, which sounds amazing (see his comment), and I know I will love Laura, a character who free associates even more than I do!

Seana directed me to The Voices, by Suzanne Elderkin, which takes place in Australia, where the spirit world intersects with the tangible world perhaps more readily than here in the American Midwest, where I am taken by the wind.... Seana is great for international recommendations, so see her wonderful book blog, Not New For Long!

And a character in The Used World, a novel by Haven Kimmel, is reading A Prayer for Owen Meany, by John Irving, out of which an important photograph falls. I like this book except that I am having a hard time keeping track of all the characters, partly because I set the book aside so I wouldn't have one novel overlap another novel (The Cookbook Collector, by Allegra Goodman) before my book group meets to discuss it, but I am reading it early, anyway, because it is due back at the library, and partly because it folds back in forth in time, like origami, and like real life in various suspended states: alpha state between sleep and waking, death, dental procedures if you are given gas (and just happen to finish reading The French Lieutenant's Woman, by John Fowles, in your mind, giving it a few more variations.)
Posted by Kathleen at 10:25 PM

Kathleen, one of the most fascinating documentaries I have seen is Between the Folds from Independent Lens on PBS. You can stream it instantly from NetFlix. Paper folding. Amazing.
And when I was in my late twenties my former wife and I backpacked through England and Europe. I was a big fan of Fowles and I'd heard he lived in Lyme Regis, a beautiful south England coastal town. This town is the setting for French Lieutenant, both the book and the film I believe. After having been given directions to his house we realized we were walking along a path through a field on a high bluff. It was the same path that Meryl Streep walks in the film. And it led to Fowles house where I promptly chickened out when presented with the opportunity to knock.

I love your beautiful origami brain with lots of folds, indicating a VERY high level of intelligence!

When I read A Prayer for Owen Meany, I was staying with a friend and her family for the weekend. When her dad saw my book, he said enthusiastically, 'I think it's great that young kids are reading books that include God's word.'
I didn't have the heart to explain it to him...