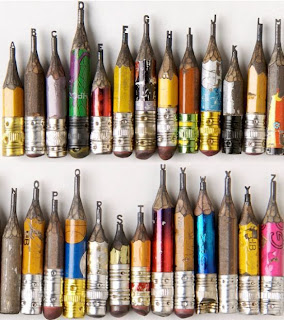 Day 219 of the "What are you reading, and why?" project, and, while I have finished reading The Correct Spelling & Exact Meaning, a book of poems by Richard Jones, I cannot part with the pencils!  You can click on sample poems on either of those links to book or poet at Copper Canyon Press.

I am preparing a poetry feature on Jones for Escape Into Life, where you can see all sorts of fabulous art and read wonderful essays.  Today's poetry feature is Diane Lockward!

As Wednesday is usually my hump-of-the-week hodgepodge of coincidii, today we get a pencil & punctuation potpourri:

1) Richard has a poem called "The Napkin." (So do I!) In it he mentions the Wailing Wall.  (So does Sue Monk Kidd, in The Secret Life of Bees, which I just finished!  In both cases, sad individuals cope by writing their troubles down on scraps of paper and tucking them into the cracks between stones.  Personal versions of the actual Wailing Wall.)

2)  Richard has a poem called "Walking in a Cemetery, My Children Ask about the Markings on Tombstones."  I have been in rehearsal for the annual local cemetery walk, and one year the guides focused on what the markings mean, and I have handled booklets about that where I work.  The poem is wonderful, of course, and does it in a poem-y way.

3)  Richard has a poem called "Affronts" that begins with a list of dislikes: "weeds, litter, graffiti, tattoos."  Of course he goes on to praise those things and would even forgive me the terrible affront of a word like "poem-y."  But the coincidence that tickles me is that he calls those blue roadside flowers at the edge of fields "cornflower," as do I.  They grow beside corn!  Officially they are chicory, but they are familiarly known as cornflower and are the cornflower blue of the Crayola crayon.  Another plant, also known as habry and bachelor's button is the official cornflower, as I understand it.  But I can tell from this poem that this "spindly yet thick-blooming blue weed" is the same one I know and love.

4) Many of the poems are about reading!  Reading the dictionary, for example.  And/or actual letters of the alphabet.  (See pencil alphabet above!)

5) There are short poems in the center of this book in tribute to and titled with pieces of punctuation:

I like those stubby pencils, too. Endearing. Thanks for this post - I am going to check out some of the sample poems. I like the topics, and am also a big fan of graveyards.