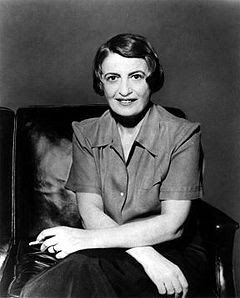 Day 127 of the "What are you reading, and why?" project and Fred is reading The Fountainhead by Ayn Rand because his daughter made him. He is reacting as some of the first reviewers did, finding it very long--heh heh, "a whale of a book," to tie in with all those baleens in earlier entries--with not very pleasant characters.

It is, however, a very popular book, especially among young people seeking a heroic philosophy of life and/or older people seeking to justify a life of rational self-interest. I remember when my uncle insisted that I read The Fountainhead and Atlas Shrugged, which I did find intriguing in my 20s, and which I did see entwining with the philosophies of Aristotle and Nietzsche, having just read them in college. However, my uncle was also a follower of L. Ron Hubbard, the science fiction writer who created a religion.

I asked Fred if The Fountainhead was the one with the excellent roll-your-own cigarettes, but it isn't. That's Atlas Shrugged, where the really smart people, the best people, who know how to make good things, retreat to a mountain and make the rest of the country's economy fall apart since they are no longer contributing to it. Oops! I think this plot spoiler is OK, as Rand's Objectivist philosophy is well known, and laid out nicely in Wikipedia. (I love Wikipedia, even though college students are not allowed to use it as source. It's a great place to go and have things all together, listed and summarized, and then you can go to the other sources to track things down and verify them.) Anyway, although smoking is bad for us, and we shouldn't do it, I remember intensely how good those roll-your-owns sounded in...Atlas Shrugged. (Plus, the title itself is a spoiler!) She's smoking one in her portrait above.

I had forgotten, till Wikipedia reminded me, that Rand was a Hollywood screenwriter, and even an actress--an extra, anyway. But she did not like the film adaptations of her novels. Sounds like she was a hard person to please, and had a falling out with her libertarian friend Isabel Paterson, of The God of the Machine. Which reminds me of that book about literary feuds that I saw lying on the floor at Babbitt's. I wonder if these two are in it! (I'll let you know. I am getting paid in books for labor & display of two poetry/art collages I made as samples for an upcoming workshop at the store in July, so maybe I will pay myself with the feud book. I have already paid myself with The Life and Mind of Emily Dickinson, by Genevieve Taggard, which I have already read but didn't previously own a copy of; I read it back in college, as research for The Belle of Amherst. And I would have paid myself with Sylvia Beach's book on her Shakespeare and Co. bookshop, which I held for myself for a couple days, but which I then released and of course somebody bought it.)

I would just like to say, parenthetically, but outside the parentheses, that I forgive everybody for their love lives, Rand included. Speaking of feuds, she was not very forgiving, even if she was randy enough to marry a fine-looking actor and later have a romance with Nathaniel Branden, also married, with the OK of the respective spouses (if we are to believe Wikipedia), because later, when Branden fell in love with somebody else, he and his wife (again trusting to Wikipedia) thought it best not to inform Rand, which turned out to be right, as when she found out she blasted him in print for his personal life. Sigh...

In the words of my friend Tom, who was defending a guy a bunch of other people were ridiculing, "He's just a guy trying to get by," which might also be said of Rand, ridiculed as much as she is revered. Alas, my kids know of her in glancing references in The Simpsons and South Park. (Yes, I let my kids watch these things. They are 20 and 15. The 15-year-old doesn't watch South Park.)

And now a whimsical discussion of the pronunciation of her first name. In my 20s, when I was reading her books, I always heard it in my head as AYn, long "a" sound, as in Ayn Misbehavin'. Later, one of my college students insisted it was just a quirky spelling of Ann. And Wikipedia tells me it should be pronounced EYEn, long "I" sound, putting the "I" of her "rational egoism" and the "eye" of her visionary status right there in the sound of her name.

Wikipedia also says this about another of her books: "Her novella Anthem was published in England in 1938 and in America seven years later. It presents a vision of a dystopian future world in which collectivism has triumphed to such an extent that even the word "I" has vanished from the language and from humanity's memory."

And now, late for work, I must vanish.
Posted by Kathleen at 9:20 AM

I did indeed bring home Literary Feuds: A Century of Celebrated Quarrels--from Mark Twain to Tom Wolfe, by Anthony Arthur...but Ayn Rand is not in it. I am sure I will find a way to tell you more about it eventually!

It opens with the question "Can good writers be bad people?"

I have never read any of Ayn Rand's books, perhaps because I've always felt as if I wouldn't like them...

I wonder if this has something to do with the good writer/bad person conundrum?

They are enormously popular in the Silicon Valley, where ultrasmart people who are good at engineering electronic objects think society can be modeled in similar ways.
She and they are the most unselfconsciously sentimental people one could meet. It shows in her gushing, formulaic writing -- good guys are tall and strong, melting the gals with their steely whatever, bad guys are subhuman bureaucrats.
The interesting thing is that she, Von Mises, Hayek, and the rest of them looked at 30s/40s socialism, and figured it would win, particularly in the West. They were completely wrong. Their fans don't seem to get this part.