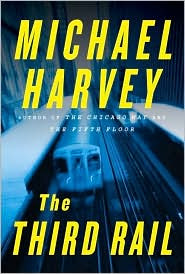 Day 113 of the "What are you reading, and why?" project, and Sheila is reading The Third Rail, by Michael Harvey, a murder mystery set in Chicago. I assume she's reading it because 1) she lives in Chicago and 2) she's read others in the series, as this is #3.

In Harvey's mysteries, Michael Kelly, a former police officer turned private investigator solves crimes in Chicago, with a great feel for the city because the author, a former journalist, still lives and owns a bar there. I wonder if all my Chicago police officer friends are reading this series?!

This one is pursuing murders on the CTA, so maybe I should avoid it, as I take a lot of public transportation in Chicago. There is a particularly chilling murder on an el platform, here excerpted via the Washington Post review by Gerald Bartell:


Kelly has his own nasty brush with the sniper...one snowy morning when a man named Robles approaches a woman standing on a mass-transit train platform. He points a gun at her left temple and fires. She drops "like a puppet with the strings cut all here and there, arms, legs, and a smear of lipstick across her lips and down her chin."

Ew, ew, ew. Both the Chicago Tribune and the Chicago Sun Times think I should be reading it, though. Plus, there's the Archdiocese connection, and I used to live in St. Gertrude's parish. Hmm, might have to take up the reading of mysteries, after all.

But my Barbara Pym awaits, and it's her birthday. I like her because she's subtle and funny and acutely observant, a sort of 1950s Jane Austen. But nobody read her for 20 years because she went out of fashion! Pooey on them. Then her friend and pen pal, poet Philip Larkin, brought her back into style by nominating her as "the most underrated writer of the century." Someday I hope to be the most underrated writer of the century, too. (Oh. Wait.)

Thank you, Writer's Almanac, which also reminds me that it's also Thomas Hardy's birthday. Happy birthday, dead writers. Thanks for being born.
Posted by Kathleen at 7:48 AM

Dear Kathleen, I also heard on Writer's Almanac that it's Barbara Pym's birthday today - and then I stumbled upon your blog and was so happy to read of someone else who loves Pym. I am currently rereading Some Tame Gazelle and loving it. And to think B. Pym shares a birthday with Thomas Hardy - does it get any better than that?! Thank you for your comments. I will enjoy checking into your blog regularly now.
Mary in Hudson, NY

Oh, Mary, thank you! Lovely to meet another Pym lover!