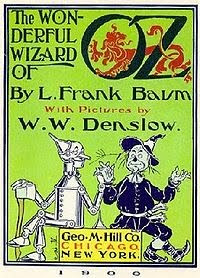 Day 122 of the "What are you reading, and why?" project, and two more random women are reading, or will be soon, the first in the Stieg Larsson trilogy, The Girl With the Dragon Tattoo, and so am I, because the movie is coming to town in two weeks. We did not have it in the shop, but the next day book two appeared...and is gone again already.

And people who entered the Anabiosis Press Chapbook Contest are reading Fragrant Inferno by Meghan Brinson, the winner, because it just arrived in their mailboxes. This is a fascinating book of contemporary poems that echo various myths of the Garden of Eden. An introductory note lays out the main characters of Adam and Eve, Lilith, Lucifer, and Samyaza, in the Book of Genesis, Book of Lilith, and Book of Enoch.

And today I handled a bunch of Oz books. Some were later printings of books in the series by L. Frank Baum, and some were written by other authors, based on the originals. One of the authors is John R. Neill, an illustrator, but not the original illustrator, who was W. W. Denslow. Others included Ruth Plumly Thompson and Jack Snow, with various illustrators other than Denslow and Neill, including Jack Kramer and Dirk.

Coincidentally, I also handled books by Gregory Maguire in the Wicked Years series, that re-see Oz from the witches' perspective.

And, by further coincidence, I pondered all this in the context of the upcoming cemetery walk in our town--upcoming in October, but auditions are in June--that takes place in the cemetery where Dorothy is buried, the real Dorothy, who died young.

And I got to experience my own joyful good fortune by way of the arrival, on roller skates, of my children on the sidewalk outside...come to borrow the car and receive some baklava. What a wonderful life! Anyway, it's my son's birthday. And Judy Garland's.
Posted by Kathleen at 10:10 PM

Fragrant Inferno sounds fascinating! Every time I visit your blog, I add more books to my wish list :)

Happy birthday to your son. Hope you have a wonderful day!!