Night and Day, You are the One 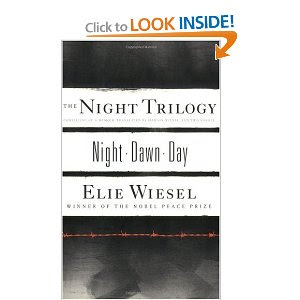 Day 115 of the "What are you reading, and why?" project, and Judy is reading Night, by Elie Wiesel, because she has read other of his works and admired them for their visual imagery. Judy is a visual artist and was a fine arts teacher; she taught high school for 30 years and also at the college level. Now, retired, she has more time to read.

Judy is brave to want to see everything Wiesel has seen in his accounts of the Holocaust and its survivors. I've linked you, above, to the Oprah Book Club edition of Night, which is the one Judy saw in the window at Babbitt's and bought, and here pictured is his trilogy of Night, Dawn, and Day (previously titled The Accident), published at separate times and now gathered in one volume. I first read Night in high school and have read it other times since, in that perennial way I do, to remind me.... Sigh.

Meanwhile, the McSweeney's keep going off the shelves and the Believers were given away before I had a chance to peruse them. How am I ever going to read everything the world has to offer?

A man was made happy finding a Jimmy Buffet autobiography and some books for his young daughter. I bought The Elegance of the Hedgehog for my daughter, then put it back, thinking she had already received it as a Christmas present, but now I think that was my niece. And yesterday, I entered into the database the original French language version, L'Elegance du Herisson, by Muriel Barbery. Ah, if only I could remember enough French to read the original!

Night and day, my head is full of books. I read to remember, and still I forget.
Posted by Kathleen at 10:11 AM

I have read Night with my eighth graders for years- their visual responses to the book are always stunning.