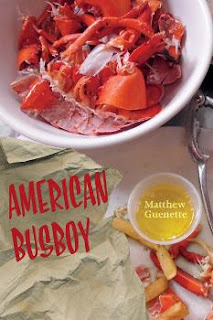 I love living in a double-university smallish city-town. Interesting people come to it, and it's easy to get to where they are speaking and usually easy to park! Tonight I went to the Hansen Student Center at Illinois Wesleyan to hear Matt Guenette read from American Busboy and Mimi Smartypants read from her blog that became a book, The World According to Mimi Smartypants.

I had met poet Matt Guenette when he lived here in town and have enjoyed following his career. He now lives and teaches in Madison, but once he worked in a gigantic seafood restaurant in the east, was, in fact, a busboy. He said he "wanted to write a book about a busboy who gets to kick the restaurant in the crotch."

As he writes in "General Attributes,"

I thought
if you were a busboy
your future was ominous
as a motel at dusk.
Then I read the legend
where food service workers
battle the economy's
giant squid to a draw.

Then I became a busboy.

Somehow this seems perfect for Thor's Day in the blog. Ms Smartypants works as a medical editor and blogs about public transportation and her kid. 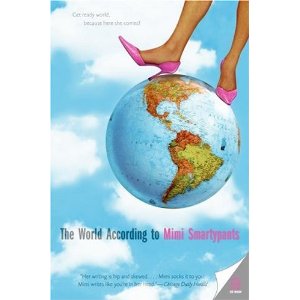 "Ms Smartypants," I called after her as she walked across the room after the reading, "where did you ride the el? From where to where?"  She used to get on at Loyola, and I used to get on one stop south of there, at Granville, but sometimes I'd get off at Loyola, and take the long way home...

Anyway, my point is, it was fun to be able to call someone Ms Smartypants!

The IWU students did a great job organizing and announcing the reading. They enjoyed themselves at the event--also well attended by people from Illinois State University and other area educational institutions, too. Nice to see!
Posted by Kathleen at 9:23 PM

Love that poem. I think the whole idea of worth based on what you do is being inverted right now. Hooray!

I also like living in a smallish university town. There is always something going on, someone coming to town.

Thanks, Seana. I do hope so. I get annoyed when sitcoms, movies, and regular people put down certain kinds of jobs. All work is good and to be respected. Someone is doing something for you!! Sigh...

And I should clarify that it's just an excerpt from a longer poem. A very funny poem!

I should read the longer poem. Should? Would enjoy doing so.

I like your smallish-large city-town with lots of things to do.

Ooh, that book sounds extremely fun. Thanks for the recommendation, Miss Smart and Nice Lady.

Sometimes my students don't know what to call me (even though I tell them to call me Hannah or Professor Stephenson). I had one student calling me "Mrs. Hannah" for a while...so odd...