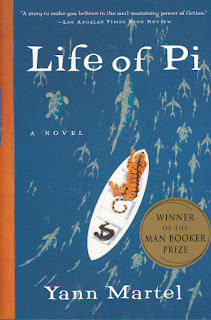 People kept telling me to read Life of Pi, by Yann Martel, and those people were right. I have a copy given to me by Gary, who writes in books, so it was fun to read it noticing his underlining and the occasional marginal note, like, "Hallucination?"

My husband read it before me, and he stuck a post-it (hot pink) on the back jacket flap: "Chapter 56. Fear." Chapter 56 is indeed about fear. My husband's handwriting looks remarkably like Gary's handwriting, but Tony claims he doesn't write in books, so 1) maybe I am really married to Gary and am just hallucinating that I am married to Tony 2) Tony forgot that he wrote in this book 3) the handwriting similarity is a mere coincidence.

But why didn't he warn me about Part 3? I finished Part 2, and said, "I think the part where you've written 'Hallucination' is real." He 1) said he doesn't write in books 2) thought I was talking about the algae island. I was talking about the voice with a French accent. (So maybe I'm not married to Gary.) He (Tony, not Gary) also mentioned quantum physics, but I did not find any in Life of Pi.

Anyway, then I read Part 3, finishing the book weeping. You'll recall that I finished the book The Worst  Best Christmas Pageant Ever, by Barbara Robinson, weeping, too. I have been asked to read the last chapter of The Best Christmas Pageant Ever aloud when our book group meets, so I practiced tonight, right after finishing Life of Pi, and wept all the way through. I will be a laughingstock. Or a cryingstalk.

While tear-laden sensitivity does run in my family, neither book is sentimental. The children's book nicely cuts through the crap of Christmas pageants, and Life of Pi was a fascinating adventure novel with zoology and comparative religion in it till I got to Part 3, when it bumped itself up a notch.

Both books contain a fine, dark hilarity. Watch out for algae.
Posted by Kathleen at 8:32 PM

Our family are criers too. We cry at everything. My sister once told me that she had once cried at a yogurt commercial. It's not a bad thing, but it does tend to worry other people a bit.

I loved Life of Pi. I read it quite awhile ago. What I really loved about it, though, was the reality of the tiger. He wasn't good, he wasn't bad, he was just a tiger. It's hard to write about the truth of animals like that.

I am re-reading Life of Pi, too. And really wondering about the movie.

Karen, I know! How will they manage so many aspects and layers of this book in movie form? But have you seen a movie called The Fall?

Brilliant, touching, weird, blew me away! I hope Life of Pi is as good as The Fall!

Seana, what you say about the tiger reminds me of the story of the toad and the scorpion, and particularly the song "Shoulda Known" by William Galison on the album Got You on My Mind, a collaboration with Madeleine Peyroux. Carly Simon sings the scorpion in this song!

Read Pi when it first came out. Need to re-read.

Sandy, I love the band called The Weepies.

Kids still talk about how I sobbed reading the last pages of The Amazing Adventures of Edward Tulane aloud to them. My son said his teacher read it to them and SHE didn't cry. I asked him, "What's wrong with her?"

I sob through the ending of The Littlest Angel, too.