Breathing Between the Lines 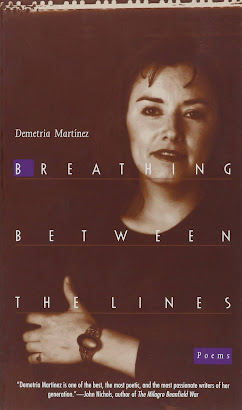 It's almost September, and I've almost filled up the little notebook I'm using to take notes on these 31+ books I'm reading in August for the Sealey Challenge. Today it was Breathing Between the Lines, by Demetria Martinez (University of Arizona Press, 1997). This was a fascinating book of love poems, political poems, bilingual poems, poems immersed in language itself, with an essay at the end (linking it to the Poetry East: Origins anthology of poems with essays, and making it another Random Coinciday in the blog!) The essay is about process, yes, but also about the U.S. government taking her to court for her poem, "Nativity, for Two Salvadoran Women," and for smuggling two pregnant women across the border with a Lutheran minister as part of a Sanctuary movement. She and the minister were acquitted, but it was a lengthy and grueling process. It stopped her writing, before it led to a novel, and poetry came back later still.

As one of her poems is called "Fragmentos/Fragments," I will also give you some fragments that stuck out for me for various reasons.

From "Milagros": "the time has come to storm heaven." This meant what it meant in its own context ("after a painting by Francisco LeFebre") and time, but it seems so timely now!

I love how the title, "Before You," sets up the first line of this poem: "My poems had no you."

In "Everywoman," probably because of the food and because I was once in a play called The Clean House," these lines stuck out: "All I want / is a clean house // Salsa on Muenster cheese / Pan dulce."

Today, we need rain, it's hot, the air is heavy, so I reinterpret "History" for its present resonance: "We prayed for rain / and the rain came." I hope it does, overnight!

In "We Talk About Spanish," a poem about language and love: "I crossed over to him / Fearless as a spider," so I have to tell you I found a spider on this book, and it crossed over to me!

In "Translation from the Vietnamese," she "hold[s] a poem up to the light

until it can be heard
above the detonations

In the fragments poem, she examines the difficulties of language, how it changes us:

In moments of grace,
poetry or prayer,
English uses me.

But most of the time, I use it.
I do not always like what I
have become in this tongue.

Oh, I have to note the irony of these lines right now, from "Wanted": "American your face is on wanted posters in post offices." Or should be. "Remember remember who you are America / Purple mountain majesty above fruited plains / worked by mejicanos."

And as the summer cicadas sing in my own back yard, I love this unique image: "cicadas hum like / gourds on ankles of pueblo dancers." What a month I'm having, learning so much through poetry!