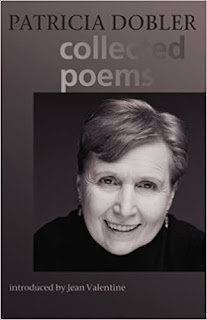 Today I sat outside in the beautiful breeze on a mostly sunny, partly cloudy day and read Patricia Dobler's Collected Poems (Autumn House Press, 2005). It's sort of a three-in-one, as it collects her last set of poems, Now, finished, it seems, just before she died, and two earlier books: Talking To Strangers, Winner of the Brittingham Prize in Poetry (University of Wisconsin Press, 1986), and UXB (Mill Hunk Press, 1991). I'm lucky to have it, as I see it's currently out of stock and out of print at Autumn House, but it was sent to me this year by administrators of the Patricia Dobler Award. I was this year's winner--a great honor--though the part of the prize that was a trip to Pittsburgh for a reading, scheduled for April 3, 2020, was, of course, cancelled. And that's not the only coincidence here. Far from it!

First, it contains many mother poems! (My winning poem was a mother poem.) And these connect with the mother/grief poems mentioned yesterday as well as earlier in the blog, as I read a poetry book or chapbook a day for the Sealey Challenge in August. Here are some lovely lines about her mother in "On the Way to a Meeting":

If she had known what I was doing*
she would have been happy for me,
my mother, her one talent was loving.
Mine is grieving.

*...drinking wine in Naples. My own mother is quite alive, has the talent of loving, and many more, and also approves of wine drinking. Sadly, Dobler's mother "was dying while I was moon gazing, / the wolf moon was already eating her." Other beautiful poems, such as "Persephone's Blues," mourn the mother and bring her to life or bravely accept her death. I particularly love this detail from "Body Secret":

In the morning I went to her bed and found
the still body, the little foot stuck out of the sheet.

So tender, so real.

Though Dobler has been gone since 2005, her poems feel relevant, even prescient. Her "Rich and Poor" sees the great economic divide clearly, the gated communities, and predicts the walled mansions to which the rich might retreat from global warming and social unrest.

As the rich become supremely rich
they disappear
invisible in their silences
they could be doing anything
behind their great walls.

There's the coincidence of a monument controversy in "Upended Monument," which, all too perfectly, shows us the bronze monument, half buried, of "a horse's ass."

In an eerie, sectioned, dream poem, Dobler recreates her own birth: "Meanwhile, my mother struggles to birth me through the early morning hours, I twist, my wee collarbone splinters..." Scary! And on the facing page, still in the same poem, the delightful line "what would Nancy Drew do."

In a darkly funny parody, "The Penelope Interview," Penelope, wife of Odysseus, famous in Greek myth for weaving a tapestry she unravels at night to fool and fend off suitors, is a fiber artist with a new show up, "Seduced by Color," at the Ithaca Center for the Arts.

Another favorite is "Your Idioglossia," about a private language shared between two sisters. No wonder one of them grew up to be a poet (the creator of the private language) in this bittersweet story of speech therapy and the loss of the "idioglossia," twisting in the water with orange carp. 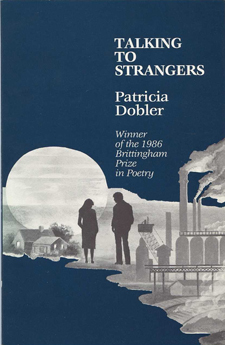 But I was struck by the random coincidii of personal connections here. Dobler is half Hungarian and her immigrant grandparents settled in Ohio. That's true of part of my family, too. She ended up in Pittsburgh, where my dad was born. In "False Teeth" her mother (or grandmother) has lost all her teeth at age 30, just as my grandmother had lost hers at age 16. Something about the soil/water in Ohio...

And then the astonishing coincidence of the poem "Forget Your Life" dedicated to a woman poet who would die too soon, right before her first (and therefore only) book of poems was published. That poet is Michele Murray (1933-1974), about whom I wrote my master's thesis at DePaul University, after meeting her son when we both worked at the City New Bureau of Chicago! When I found that poem, that connection, I gasped, and was all the more grateful and glad of the Patricia Dobler Award! (And Patricia Dobler had also lived in Chicago for a time.) 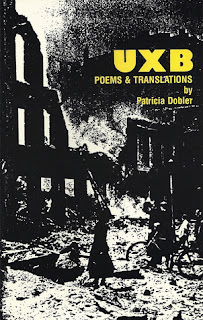 The coincidences continued--to translations, as UXB contains Dobler's translations of poems by Ilse Aichinger, the UXB being "an unexploded bomb / asleep in the old airfield more than 40 years" outside the window where "you and I were slugging it out / at the table" (the process of translation),..." a link to you / that I could understand." You can bet I felt a link to Dobler with Murray that was as powerful as the link to Aichinger that Dobler felt here.

And I connect with the love expressed in Dobler's poem "World Without End." These words, nestled in the middle of the poem, I copied down as a weird array of sirens (a car alarm?) erupted in the neighborhood:

...When sirens warn, I want
everyone I love gathered with me on a high mountain
where we start over, all of us saved by a miracle
because we are mild, intelligent and happy in our work.

Hmm, I guess I'm like the "supremely rich" here, wanting to hide away and be magically saved, though by mildness, intelligence, and happiness in work, not riches. And the last poem, "Whenever Someone I Love Gets Sick I Get Angry," all too perfectly fits our Covid times:

...So when I am angry with your fevers,
when I say "don't die" so fiercely, I want you to hear
"I love you," the full weight of those words.