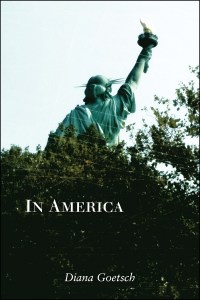 OK, now I am a little in love with Diana Goetsch, after reading In America (Rattle, 2017). I’m also a little in love with Victoria in the poem “Starbucks Name.” “Victoria is 61 and a grandfather,” but she loves her name at Starbuck’s, written on her coffee cup daily and called out in the shop. Victoria takes pictures of her name on these cups, even though

Her wife hates her breasts, hates her
risking her career and pension to be doing this,
which is also what I’m doing, though I don’t
have a wife or family.

I love how the speaker of these poems is sometimes a man, sometimes a woman, sometimes the child who wanted a “Lock on my door,” and put it at the top of his Christmas list every year, “above dirt bike, New / England Patriots jersey, Xbox 360.”

I loved learning about the Fabric Factory, “the only safe tranny bar in New York City," a bar in the Garment District, full of fabulous people,

Also me, dressed like a secretary in a Talbot’s blouse
and pencil skirt, black pumps, clip-on earrings that ached
by midnight, nude pantyhose, arm hair shaved back
for rolled-up sleeves, chest hair cleared for the top two buttons
to be undone, silk scarf knotted over Adam’s apple,
blue tint of subcutaneous beard visible in a camera flash,
but otherwise fabulous.

The poems are funny, sharp, powerful, clear, and poignant. The poet loses lovers and friends but feels a “Whole Lotta Love” for many, and wishes that arguments could end by “saying, ‘I need to check on the cornbread.’” Goetsche had me at hello, as they say, in the title poem, also the opening poem, about an incident with airport security agents.

I’m still waiting to hear about
the complaint I filed, the one that,

along with the viral video of them
repeatedly calling me “it,” shut down
the TSA website for three days

while they rewrote the rules about me.
“You could be charged for this,”
friends warn me, but in America

it can’t be libel if it’s true.

I hope that’s still true in America. These are weird times. I do know that NBA players can shut down NBA playoff games to protest racial injustice and police brutality. Resist, persist.