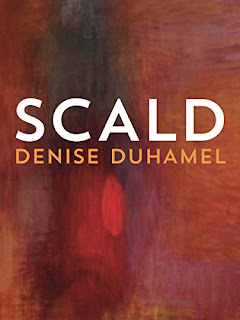 Today, again, I set out the children's toys, now reduced in number, to let them get some sun and fresh air on the glider, while I read Scald, by Denise Duhamel (University of Pittsburgh Press, 2017). It is a grand feminist adventure and tribute to three women, Shulamith Firestone (1945-2012), Andrea Dworkin (1946-2005), and Mary Daly (1928-2010). The opening poem, "How Deep It Goes," is both a fabulous romp into feminist history (and hence human history) and a deep philosophical excavation of "how deep it goes," all of it: sexism, social injustice, the inequities of being human when some people think they are more human than others. The book remains hilarious and deep, and Duhamel is way smarter and more imaginative than her smart phone. When it autocorrects her name as Denise Richards, she imagines a whole new life as Charlie Sheen's ex. Anything can happen in a poem by Denise Duhamel. 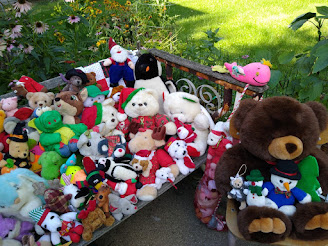 I loved learning about T. dohrnii in her poem "The Immortal Jellyfish," about many things but also the ability to "go back to childhood" after reaching sexual maturity, "from parent to infant and then back again...When the jellyfish lifts its umbrella body inside out, the past is the future, the future the past." Kind of like what I've been doing, reviewing old papers and lining up the kids' toys. This one is a prose poem, some are free verse, and many are pantoums (as in American Gun) and villanelles. And there's an amazing "braided poem" that indeed braids together three generations of experience through popular culture.

Then there's the poem "Reading," which, of course, I love, and which is also about writing, the reader who gets the writer. It starts out, "Sometimes I read pages of books without retaining anything," which also happens to me--maybe because it's a beautiful breezy day of windchimes and butterflies and a goldfinch, or maybe I'm preoccupied with politics, pandemic, and death. But books are saving me right now, and I'm glad this was one of them.

Only a few people will come to the dive
where you once danced, or turn to the page
where you left some marks, look at the words you wrote.
Fewer still will read them. Then a mixture
of vanity and humility if a stranger understands.

The title Scald comes from "Scalding Cauldron," an abecedarian (plays with the alphabet) prose poem about "Crackpot Crones," among others. "Let's scold and scald. Let's be Skalds--poets who write of heroic deeds. (Her heroes are women!) "The End is Coming" felt awfully close, and also related to Isaac's Storm, about a horrific hurricane, but it's true that some survived! As some of us will survive..., but to go back to the braided poem: "All of us project ourselves onto the perils of Generation Z / and the end of the alphabet..." I did pause, look up, and worry about Generation Z, and ask myself why we had imagined the end of the alphabet for our descendants. And now there's this pandemic, horrific American presidency, derecho, and the inland hurricane that devastated Iowa.

You should see/listen to "Crickets," by Dave Bonta, here.