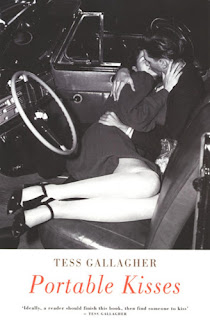 Gorgeous day, and I needed comfort, so I read Portable Kisses, by Tess Gallagher (Capra Press). Actually I read Portable Kisses Expanded, a later edition. I must have picked up my copy at the library book sale. It has a yellow sales slip in it from its original owner that I used as a bookmark. The slip is dated Sept. 29, 1996. My son was six. An earlier edition came out in 1994, when he was four, and I had my daughter that year. I had no idea Tess Gallagher was writing kiss poems, because I was too busy with the results of my own kissing! From reading the poems, I know children were desired but did not come in her own life. From reading the introduction, I now know there was a smaller, limited edition of Portable Kisses back in 1978, when I was still in college, and she had not yet met her great love, Raymond Carver.

Tess Gallagher is also in Poetry East: Origins, the one I wrote about yesterday. Her poem "I Stop Writing the Poem" always moves me so much, as well as her brief essay. It's about folding clothes, one of her husband's shirts. She was widowed by then, and still liked to wear his shirt. I saw the folding as a kind of embrace. It's a short poem, so if I quote the end, it's almost half the poem, but you see how it's also about women's lives and how they help each other through them:

I'll get back to being
a woman. But for now
there's a shirt, a giant shirt
in my hands, and somewhere a small girl
standing next to her mother
watching to see how it's done. 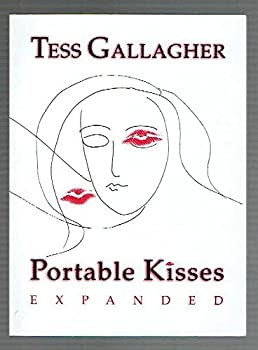 As in Poetry East, she provides an essay; this one tells how she got Portable Kisses Expanded. She wanted to make it a small, truly portable book like a small edition of Merwin's translations of Neruda's love poems that she used to read while waiting in line at the bank or the post office. The first edition was not really a slip-in-your-pocket kind of book, but this one, even though it had more poems, was!  "I conceived of the book in mottled tones--the whimsical alongside the passionate, the panoramic with the close-up, and always the intimacy of the vignette, often simply of a man and a woman speaking quietly to each other in a room."

"Widow in Red Shoes" shows us "[a] quiet gathering of a few old friends, / my first time with some of them / since his death." Getting ready, she finds some favorite red shoes of the 60's. "Already they have the look / of something misunderstood." But she wears them:

He always loved
me in these red shoes. Defiant, sexy
and with him. 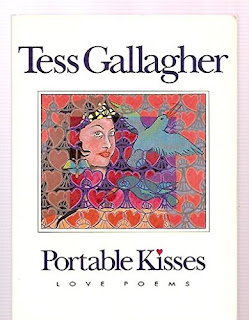 The yellow sales slip shows this book belonged to someone who also bought beads and rings. I bet she liked the red shoes, too.

There's another Poetry East: Origins / kisses connection, as Ross Gay's poem is about "a goldfinch kissing / a sunflower." It's as sexy as Tess Gallagher's poem "Sugarcane"--sugar cane is also one of the recent coincidences here in the blog. It reminded me that you have to bite the cane first, to get at the juice, and then suck hard.

While I was reading, a squirrel was eating nuts out of my hand.

I last read Portable Kisses in manuscript, back when I was in grad school. It's time to find it again! Thank you SO much for doing this series, Kathleen. (And what a lovely surprise to find my own book in your month of reading poetry.)

Happy to make you happy!