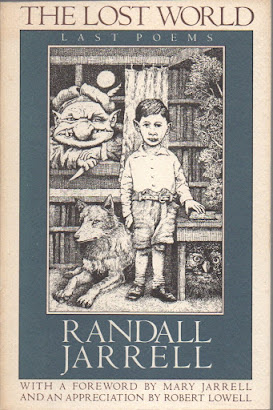 Today I read The Lost World, by Randall Jarrell, for Day 16 of the #SealeyChallenge. It was first published in 1965, in March, and Jarrell died in October of 1965, hit by a car, as Mary Jarrell states in her Foreword to the 1985 edition, the one I read, with a Maurice Sendak cover. (Some think Jarrell's death was a suicide, but Mary doesn't.)

It wasn't the book I had intended to read today; it was the perfect one, the one I chose in a nostalgic mood, after a day of recovering a bit of my own lost world, and letting a lot of it go.

It was a beautiful morning, and the urge came upon me to use the lovely summer day to bring up boxes from the basement, go through musty old papers in the sunshine, and see what should be recycled, and what saved. And so I may tell you more about me than the poems. Perhaps I've been doing that all along.

I'll start with the random coincidii.

In the boxes were cards, postcards, and letters from my early years in Chicago, not long after graduating from Kenyon College, when I was still corresponding with Kenyon classmates. Randall Jarrell taught at Kenyon, which is mentioned in the book in the Appreciation by Robert Lowell, also reprinted from 1965. 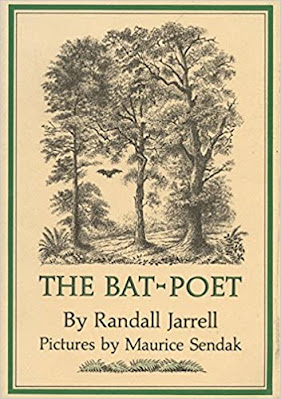 The Lost World contains a couple poems from The Bat-Poet (another book with Sendak illustrations), and I directed a Readers' Theatre production of it, and once performed in it (when the actor playing the bat got sick). I love those poems. In the poem called "The Lost World," Randall Jarrell reconnects with his childhood, his grandparents, as I did today, finding their birthday cards to me, as well as my children's childhood, through their toys and crafts and handmade cards.

In Jarrell's poem "Hope," there's a linden tree. I used to climb a linden tree, and grew up on Linden Street Road, out in the country. In "Next Day," a woman feels sad about getting old. I even discovered a connection to yesterday's reading, where Robin Coste Lewis, in cataloging art objects, finds a clock that is a woman.

In The Lost World, "a grandfather's

Clock with the waist and bust of a small
But unusually well-developed woman
Is as if invented by Chagall.

In several poems, Jarrell speaks as a woman, with great empathy and insight. "The Lost Children" contains his wife Mary's dream and her memories. But the long poem "Woman" feels old-fashioned, trapped in the 20th century, with Freud.

The last poem, "Thinking of the Lost World," did make me cry. "Or if only I could find...," he says, naming a favorite toy, a remembered car, the plot of the dinosaur movie extended in his imagination. As if he could recreate his world through just a few objects or souvenirs.

All of them are gone
Except for me; and for me nothing is gone--

It was a little the same for me, as I handled the letters and notes, lanyards and lace, rick rack, toys, buttons, shells, tiny objects saved to glue together into new things.

Except for me, a few more things are gone.