Oldest Map with the Name America 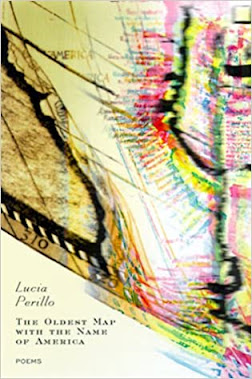 Today I rose early, before dawn. Once it was light, I gardened--watering, weeding, clipping, collecting cosmos seeds in an envelope--because it was finally cool enough, breezy enough. Then I rested, and read The Oldest Map with the Name America; New and Selected Poems by Lucia Perillo (Random House, 1999). I first started reading her poems in the 1990s, when she lived part of the year in Washington state and part in Southern Illinois, where she taught. This book culls poems from Dangerous Life (1989) and The Body Mutinies (1996), giving many, many new poems in Part 3. The oldest map of the world that names America is a woodcut wall map in 12 panels by Martin Waldseemuller from 1507, where, as Perillo puts it, "the world approximates that shape we call a heart." 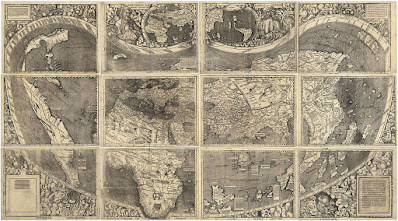 I've been surprised by the coincidences in what I've read this month--a few being the recurrence of mosh pits, kimonos, television shows, among them, Star Trek, fire--and how I've been choosing books with America in the title or in the cover image. It's as if I want America to be better, to be saved. "Sometimes I feel history slipping from my body / like a guilty bone," says Perillo, and sometimes I feel that, too. 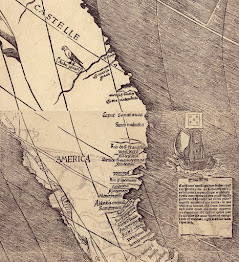 But let me give you fragments again, the random coincidii, and the glorious search for beauty in "The Revelation" and other poems: "you will find that beauty, a cataclysmic / beauty rising off the face of the burning landscape..." Fire haunts me again as a reader here, and in "La Vie en Rose," with Edith Piaf singing in the background in the car as her family flees a fire on the Jersey Turnpike. And in the beautiful "Ghost Shirt," Perillo juxtaposes a visit to the Museum of Natural History in New York City with the LA Riots in reaction to the acquittal of the officers who beat up Rodney King, and New York's response. Alas, history is still slipping from the body of America like a guilty bone. The "ghost shirt" hangs there as a warning in the museum, and, in history, for Indian warriors who need to take up the fight:

will grow little, just about a foot high,
and stay that way. Then some of those
will be turned into wood and burned in fire--

But at the end of the poem, after a fearful subway ride, she makes it safely home. "And the only fires were the tiny flames / of people holding candles, outside the public library." Thanks for that vigil, and that location! But I'm ahead of myself.

Perillo was a park ranger as well as a poet. She'd go up into the mountains to be alone and to listen:

One reason I went up there was because at sundown
when the wind climbed the back of the mountains
along with the spreading violet light,
you could hear the distinct murmuring that the Indians said
were the collective voices of the dead.

I've heard that, too, in the wind of my own back yard. And speaking of mountains, another connection--to the purple mountains of the song but also to yesterday's Breathing Between the Lines, though, as Perillo notes, "when you get there, the mountains are never purple." 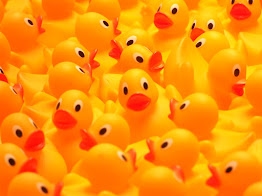 And in "Palimpsest" (a word I have to look up every single time*), I find again "those seven thousand plastic ducks / shucked loose when their cargo ship broke up at sea," that I'd read about in the news, but forgotten for a while. And "This I commit to memory forever: the command / I closed my eyes and forced myself to swallow like a hook" so she wouldn't forget certain wonderful things. I've done that! But I kept my eyes open that beautiful, breezy summer day--a day like today!--in the yard of my family home with my dog, and I have never forgotten that moment, that day, that dog, Dulcie!

*a piece of writing or art where the original has been erased or obscured by what came after; layers, as of history or nature working in this same way to cover but also possibly reveal what came before....

I love that she likes Edward Hopper paintings, and has a poem about them (so do I!), specifically "the women in Hopper's paintings," and how they are in natural poses, not poses at all like odalisques looking back over their shoulders, just natural women, really "all share the body of his wife, Jo, whom he drew / often with a crumbly rust-colored crayon / called sanguine, I've learned: French for blood."

Oh, I could go on and on with what I love, but I'll stop here, quoting a little bit from "The Sportsmen's Guide," a poem in honor of the birth of her nephew:

...Someday
you could even write a poem, the tradition of which
pretty much demands that the reader be told off the bat
what a muckheap the world is. But then comes the swerve
where the poet flipflops or digresses
to come up with something that the muckheap
will surprise you with.

I hope so. We need some good surprises. Soon.