Adjusting to the Lights 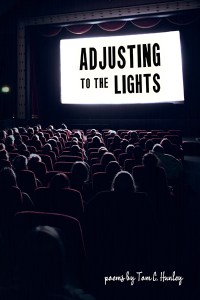 Tom C. Hunley must be exhausted! The poems in Adjusting to the Lights (Rattle, 2020) are about raising a son who is on the autism spectrum and a daughter whom he and his wife adopted when she was a teenager, whose birth mother was a heroin addict and birth father was abusive. And these are just two of the poet's four children (the bio on the back cover tells me). There's lots of trouble, worry, and stress here, to be sure, but also so much love. So much desire to protect these children. The first and last poems, like prayers, are addressed to God. Several of the poems express the wish to be a better father, but he seems like a darn good one, in the end:

I've had to give up so many
of my own dreams in order to find myself
in theirs.

He does sound like any mother or father who has made the full commitment, yes, but also like a poet who's had a harder time finding time to write than most, and who seems to have written one of these poems in traffic school! Who was once a census taker! "There was no autism box to check." Who tries to help his son understand "What She Said" as a phrase that's "only funny in context" and whose son has redeemed that awkward punchline forever for me now by uttering it out of context, repeatedly, in innocence!

Oh, how dearly this father wants to protect his daughter from the boys who take advantage of her, from her own past. "Her mom and I wanted her / the way sunlight and water want grass."

The wonderful cover is of a movie theatre with people in it! The cover and the book's title relate to the poem "The Last Time I Took My Son to the Movies," where they go to see Wonder, a movie about a boy with a special condition

who gets bullied until the other kids
get used to his face and learn to see
past it into his beautiful true self.

In the poem, his own son gets bullied by a rude man in the seat in front of them, who doesn't understand the boy's behavior but who adjusts, and changes his seat, when the irony of the situation is made clear to him.

But after the movie
I couldn't find that man among the faces
adjusting to the lights coming on.

Wouldn't it be nice to be brave enough to apologize to each other, to forgive each other, whenever we can?