The Death of a Migrant Worker 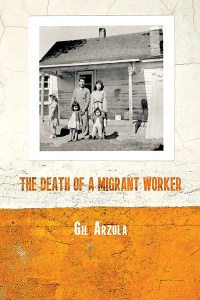 The Death of a Migrant Worker, by Gil Arzola (Rattle, 2021), is another of the wonderful Rattle Chapbook Prize winners I've been reading this August during the Sealey Challenge. I am so grateful to be learning about so many people's lives through their poems this month. In this book, his father dies in the opening poem, the title poem, and his mother dies or is dying in several thereafter, but his words keep them here a while, alongside his grief. In another kind of memory, another kind of grief, "She sat up in bed / damp as a day in August," in the poem "412 Beechwood Avenue Where I Lived." "After that I was tossed / like eggs over easy."

In "Surviving Storms," I love the wisdom of bending to the wind like beach grass. Even a tree, until it can't, can "give with the wind," as in "The Difference Between Me, a Rock, and a Tree," and, like a poet, "A tree has learned to pay attention." And I love the specificity of what he sees, as in "A Poor Mexican Woman Makes Supper," when he begins: "She measures nothing. She / tosses flour like confetti..."

And I love the coincidental similarity of the title "Not Everything Should Be a Poem" to a title in Maggie Smith's book Goldenrod, from yesterday. Smith's poem, called "Not everything is a poem," sure turns out to be one, a listing of what a mother finds in her son's pockets before the wash! In Arzola's poem, where the title is a sort of warning, he says:

Some things need no words to be
immortal.

Some things matter enough
by themselves,
without description.

True. Still, he does a fine job of describing the things he shows us, and evoking the importance of what he'll leave alone.