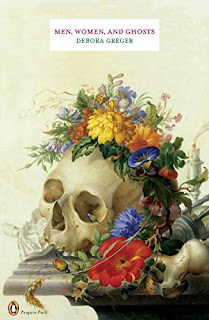 This one I chose for its fabulous cover after becoming intrigued by Debora Gregor's In Darwin's Room. The cover art is Vanitas Still Life by Herman Henstenberg. In Men, Women, and Ghosts (Penguin, 2008), I found educated and allusive poems, imaginative, ekphrastic, and persona poems, some clever and funny, some connecting with women in myth and fairy tale so they seem at times to be engaging in a kind of pleasant, modest, self-mythologizing.

Here at the end of a month full of poetry books, I relaxed again into noticing where I intersect with the poems and where the books intersect with each other. "Her Posthumous Life" is in the voice of Fanny Brawne, someone I once played in a one-act about John Keats. (Wikipedia has a whole section on her "Posthumous controversy"!) Greger's poem ends, referring to a Keats ode,

To Darkness, it begins,
and then goes on. Goes on into darkness,
knowing the weight of earth.

This, of course, connected with the darkness in Goldenrod.

In "Chekhov for Children," the speaker is a stagehand for the play Three Sisters, dressing Olga between scenes, just as I, as an understudy also playing a small role as a maid, dressed Masha backstage at Steppenwolf years ago! You never know when or how reading a poem might cause the past to wash over you.

Or a dream. In "Death Comes to Florida" (which also reminds me of the news, now), an elegy for Donald Justice, Greger's image of Death as a wild boar reminded me of a recent morning dream of a wild baby pig sleeping under a baby blanket on my lap. (What does it mean?!)

Side by side with all the intersecting, I just enjoyed the language, like this couplet from "Missing":

A water taxi opened the Grand Canal like a book.
Its pages were green, edges deckled with foam.

And I should mention that it's August in "The Marriage of Orpheus."