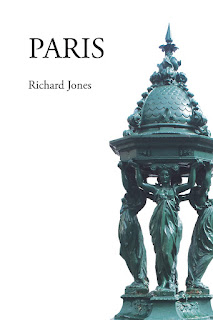 As I recall it, and this was many years ago, Richard Jones and his new wife missed their flight to Paris, and the plane crashed, killing everyone. In Paris (Tebot Bach*, 2021), on a later visit, everything is calm; it's a beautiful city, filled with history, poets, painters, composers, sculptors, ex-patriots, and flâneurs, even the Little Prince. You'll find conversational rambles here, sweet interactions with other tourists; quiet, inward moments. In "Brancusi":

Consolation is not what I came here for,
but it is better than anything I might have wanted
before I came to Paris.

I might say the same about the book, Paris! I just spent the weekend--of Lollapalooza--in Chicago, seeing a play, plus family and friends, roaming my old neighborhood on a beautiful, breezy summer day. We, too, were flâneurs, stopping at a sidewalk cafe for mojitos, perfectly muddled with mint. How lovely to visit a city that, because I once lived there, still reminds me of home. How consoling, after witnessing the crowds, actually to come home! In Rodin's gardens, Richard Jones misses his own...

He came searching and found nothing---
Paris almost did him in.

In contrast, in "Strindberg and Miller," Henry Miller did, and became brave enough to face the future by accepting the present. Look at this:

But in Paris,
Miller came to understand
freedom is obtained by the acceptance of suffering
and by giving suffering meaning.
He foresaw the future of poetry,
the terrible day when poets
would deliberately make themselves unintelligible
and renounce their power to move us.
Such poetry, he said, is worthless,
a betrayal of trust.
The world, Miller insisted,
hangs on the poet's every word;
the place of renewal is the heart, he said,
and there the poet must anchor himself. 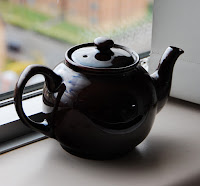 Richard Jones does anchor himself in the intelligible, via the heart. His Paris is full of photographers and philosophers, booksellers and bakers, children and old men, bicycles and boats. The play I saw, after the mojito, was called Riding the Bicycle. I love these lines from "'The Drunken Boat.'"

The bicycle woke me to the fact
I was walking Saint-Germain's winding streets
a little bit like a drunken boat myself,
adrift on a sea of reveries.

I'd tell you more, but it's late, I'm sleepy (I'm drinking wine to make sure I sleep), and, as Richard would tell me...

...in our numbered days
we will never finish
all the work we are put here to do.

(And this is only Day #2, of the Sealey Challenge.)

Beautiful Kathleen, glad that we could join you & family in part of your Chicago visit.
Basel