Playlist for the Apocalypse 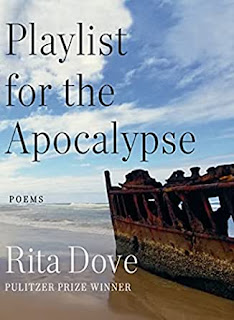 I let myself read this one, Playlist for the Apocalypse, by Rita Dove (Norton, 2021), in the shade, in the breeze, the heat and its heat advisory having lifted, on the patio this morning. Lovely to read a new book by Rita Dove, in her own clear voice, and in the voices of many others--human and cricket, dead or alive, and even the Statue of Liberty, who is "Liberty's pale green maiden, stranded" in "The Sunset Gates." I took few notes, letting the poems and our shared history wash over me. I appreciated the notes at the end, giving context, and alerting me to how the poems in "A Standing Witness" were part of a collaborative song cycle, meant to be sung by mezzo-soprano Susan Graham, but delayed by the pandemic.

The poems in a section called "After Egypt" are about the ghetto in Venice, and "the first use of this word for segregated, and subpar, living quarters." In her notes for the poem "Foundry," she explains, "Ghetto is a derivation of ghet, Venetian dialect for foundry, and refers to the island where foundry slag was dumped before the Jews were forced to move there." Such sad and moving lines:

...You think
as long as we stay where
you've tossed us, on
the slag heap of your regard,
the republic is safe.

And, alas, that attitude is still out there, applied to many groups of people, unwanted by other groups who pretend they are protecting their republic.

That section made me think of Shakespeare, his Merchant of Venice, and Shakespeare turns up in another poem, "Shakespeare Doesn't Care," for writers possibly worried about their literary reputations:

What does he care
if we all die tomorrow?
He lives in his words. You wrestle,
enraptured, with yours.
What time does with them
next, or ever after,
is someone else's rodeo.

I identified with "Insomnia Etiquette," which begins, "There's a movie on, so I watch it." I actually watch movies to fall asleep to at bedtime, and read a book if I wake in the night (often at 3:33 a.m.) "I will regret / not being able to find / a book to get lost in," she says!

And the "Little Book of Woe" section contains poems that address her multiple sclerosis, something her notes tell us she kept private for a while, so she could handle her illness on her own. I love the poem "Soup," about...soup, just what we want when we're sick!