And There is Many a Good Thing 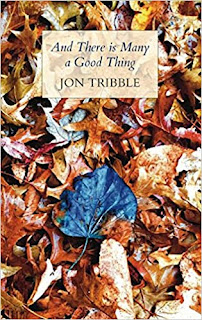 I turned to Jon Tribble's book, And There is Many a Good Thing (Salmon Poetry, 2017), not only for its perfect fall-is-coming cover, but also for the positive, optimistic sentiment in its title. The cover image is "The Blue Leaf" by Allison Joseph, poet, Jon's wife, and, alas, now his widow. I have the Irish cover, with the leaf turned sideways, as you can see here. Shown is, presumably, the American cover, which you can also see at Amazon. Either way, a lovely cover, though I prefer mine, probably because it is mine.

Once again, I read alert to the intersections of this poet's book with my own life, and this book with the others I've read this August for the Sealey Challenge. This book goes to Mexico, like The Death of a Migrant Worker. It has fishing poems, like The Mysteries of Fishing and Flight and Night Angler. It has constellations and whooping cranes, free verse and pantoum, elegy and grief, "and there is many a good thing," like music and food. These things do sustain us, as I hear in the final stanza of the opening poem, "The Divine":

as the final note possesses Sarah Vaughan, possesses us,
documents the sound we should define as pain,
as regret, as love and loss, as human.

And I realized this book contains two of Jon's poems I had included in an anthology some years ago, poems of place and origin, Where We Live: Illinois Poets. Good to meet them again here.

Yesterday, telling you about Men, Women, and Ghosts, I also told you about my dream of a wild, baby pig. Strange and delightful to encounter Tribble's poem titled "Long Stories About Short Pigs." In the first story, a beggar boy takes a wild ride on a metal pig. Then my heart broke when the poem shifted to "the last Vietnamese family / pressed into the metal belly of the cargo / chopper" and made the connection, as many have been doing these last few days, of the exit from Vietnam and the exit from Afghanistan, leaving people behind. More heartbreak in "Banner Days in America," a poem that starts with burning a flag and ends with folding one.

Indeed, for all the delights in this book, heartbreak, injustice, trouble, or irony are right there in the background, perhaps in a restaurant, enjoying Chinese food, while a boy and his grandmother talk about things you'd rather not have to overhear. "A pig is never only a pig," Tribble reminds me, and, alas, "a fairy tale is only a fairy tale." Sometimes there are no happy endings. In "Lucky Life," about the need for riverboat casinos, "[a] few spindly antennas" in small towns are "shaping these lives to All-American mold.

Huddled about the pixilated fire,
cartoon promises guarantee That's all,

folks! with piggish glee, but is it?

Ah, yes, the pig of my childhood. But this is a grown-up book.

I was grateful to see Jon and Allison get married again in "Indiana Marriage," a poem I'd heard them read when they came to my town to read at the library. This time, the Key lime pie made me cry. And the last poem in the book, his "Spirit Currency," a double elegy, for a mentor and a friend, resonated now for Jon: "Wherever we travel, / there is no destination loss has not visited before us."