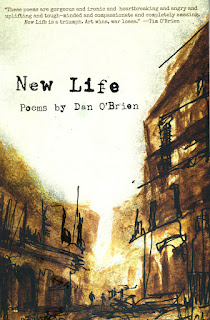 New Life, by Dan O'Brien (Hanging Loose Press, 2016) is another example of the right book at the right time. Little did I know when I ordered it while seeking plays to suggest to Heartland Theatre--as O'Brien is also a playwright--how pertinent it would be to the new-current-ongoing situation in Afghanistan. The book is a sequel to War Reporter, and both are about the actual war reporter and Pulitzer-Prize winning photojournalist Paul Watson. O'Brien has written plays based on Watson's reportage and their relationship, and they've pitched scripts to Hollywood together. Their ventures in art as well as Watson's experience in Somalia, Afghanistan, Syria, and Iraq are part of this book, which also hopes for a "new life" away from war and back to family.

"The Poet in Afghanistan" contains the lines, "...The breaking news / from Kabul spooks the poet," and this must still be true, getting new life from the troubled military and civilian exit from Afghanistan now. It contains the brutal reality of danger to interpreters, and a concern for them side by side with the hardened attitude of a longtime reporter:

...And anyway
Najib won't write back. Maybe he's escaped
to Pakistan? or had his hands hacked off
for interpreting me. But have no fear,
partner of mine. We'll find our new story
elsewhere in the meantime.

This kind of violence pervades the book, along with fear, denial of fear, bravado in the face of fear. People are killed by the side of the road, in their homes or out; they're in danger for driving at night, for talking to the wrong person. They are damaged, physically (grenade, half-open window) and emotionally, and yet they go on, if they don't die. In "The War Reporter Paul Watson Expects to Depart" is this sobering reflection:

...We spend so much of our time
criticizing presidents and generals
who feed school kids into the mouth of war
when what we should do is just pause and check
the courage of our own decisions.

An opera has been made of War Reporter, and in "The War Reporter Paul Watson on the Downward Slope," it's part of Watson's reflection on the death of his brother and the state of his heart and mind:

...He'd been on the downward
slope since the day he was born. And truth is
I hardly feel a thing! I've felt more grief
taking pictures of corpses. That opera
tonight of my life has made me feel more
than my own brother's death. But that's no shock,
I guess. Music is peaceful, especially
all that singing.

You hear the conversational tone here, as well as the agony and lack thereof, all of which switches back and forth throughout the book. Poet and reporter engage in email exchanges, phone conversations, fights over Hollywood pitches; they care about each other, they care about the world, and they want peace amidst "all that singing."

There are personal poems containing the joy of an expected baby, the grief for a dead friend. But there's a lot of the danger and violence and deadly repetition of the conflicts that lead to war. Even the personal, as in "The Poet Confesses," expresses this awareness: "We love war, your mother and I adore / our Shakespearean meltdowns." And history definitely repeats itself, as in "The War Reporter Paul Watson in a Coffee Shop in Aleppo":

Every revolution has a problem
with power. Submitting Afghanistan
as an example: jihadis will come
with strings attached.

Alas, they are here now. The poem continues, and ends this way:

... A young man rises. Your country
did nothing. Pointing, crying. I wonder
if he could hit me. Have I betrayed him
personally? Trying to smooth things over,
an old man interjects: We do not love
jihadis. But the more our people die
the more we learn to love.