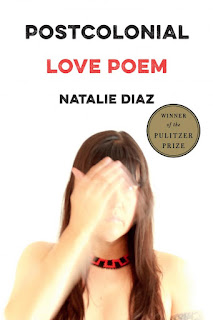 I haven't seen much of the Olympics, but I did watch some exciting basketball. And there's exciting basketball in Postcolonial Love Poem (Graywolf Press, 2020), by Natalie Diaz, winner of the Pulitzer Prize. In "Run'n'Gun," she writes that she "learned to play ball on the rez, on outdoor courts where the sky was our ceiling. Only a tribal kid's shot has an arc made of sky."

It's a prose poem in sections; here's one:

"We played bigger and bigger until we began winning. And we won by doing what all Indians before us had done against their bigger, whiter opponents--we became coyotes and rivers, and we ran faster than their fancy kicks could, up and down the court, game after game. We became the weather--we blew by them, we rained buckets, we lit up the gym with our moves."

The river runs through this book. "The First Water is the Body" begins, "The Colorado River is the most endangered river in the United States--also, it is a part of my body." Later, the "I" becomes a "we." "We carry the river, its body of water, in our body." In the poem called "exhibits from The American Water Museum," water is like language: "I am fluent in water. Water is fluent in my body-- / it spoke my body into existence."

Love poems wind in and out. Animals. Snake, wolf, crane, coyote, bull, tiger, horse, yellow jacket, all the animals on the ark. More basketball. In "The Mustangs," her brother is a high school basketball star; the team is beloved by the whole community. "We ran up and down the length of our lives, all of us, lit by the lights of the gym, toward freedom--we Mustangs. On those nights, we were forgiven for all we would ever do wrong."

It was a beautiful day to read this book outside. I love August, its pure summer feel, its poignant, back-to-school-soon, summer's-almost-over-feel---but it isn't! Summer goes on and on, long past school. And now August is the Sealey Challenge for me, a poetry book a day, a lushness of reading in the green afternoon, the coneflowers blooming, phlox, round two of golden lilies, the oregano flower-headed and leaning out into the lawn. I love how I can read these poems to learn, to experience beauty and desire in someone else's language, culture, voice. I'm reading for joy!--though, yes, I encounter grief--and for knowledge. I learn that "Manhattan is a Lenape Word." I learn the "Top Ten Reasons Why Indians Are Good at Basketball."

And what a thrill to find Kearney, Nebraska in a poem, a town I lived in as a child, and the sandhill cranes. In a heartbreaking brother poem with a dismantled Polaroid camera. What a book! And what is a sky hook? Ah, now I know!

Some years back, I read of a Native American softball team that called themselves the "Whities." I thought it was humorous, in light of the ridiculously named "Redskins," and others.