The Mysteries of Fishing and Flight 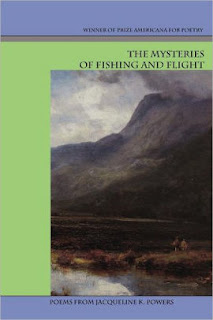 I picked at random the next book in the Sealey Challenge pile and of course it has sandhill cranes in it, to continue the convergence of connections I mentioned yesterday. And dogs, dog days, constellations, and crows. Plus, as the title The Mysteries of Fishing and Flight, by Prize Americana winner Jacqueline K. Powers (The Poetry Press of Press Americana, 2011), plenty of fishing, though often the fishing and flight are metaphorical.

I think this happened last August, too, that I kept finding amazing connections between all the poems, books, poets as I read, as well as the personal connections. Its not that we poets are so unoriginal, it's that we all see the world, we're attentive to some of the same remarkable things, and we remark on them!

I did not find August in a poem here, but I did find bleeding heart and columbine from my own spring garden, and it was almost afternoon as I read Powers's "Saturday Afternoon in the Garden," which also contained weeds. Since I had put off my necessary weeding the day before to read Debora Greger's book, I was glad I'd done early-morning weeding before I began the Powers book. She had seen "two yellow finches" in a poem, and I had seen two yellow finches feeding on the coneflower seedheads.

I was also doing laundry in the background as I read the remarkable "Feng Shui," which begins

It was a cup of coffee and throw
in another load of laundry
kind of morning...

and then moves to the shock of a suicide attempt--"but she was just a teen, they said / just a gesture, they said." I'm so glad and grateful for the survivors of this poem.

I had favorites here, with titles that suggest why: "Honeysuckle," "Swimming Lesson." And I am familiar with chores that go undone, as in "Relativity, Rain Barrels and Lies":

You say it doesn't matter
when things get done,

or even if they don't.

Behind me, as I read on the glider, loomed the volunteer maples that have overtaken the unmended fence... But now I'll just leave you with a great opening stanza from "Just Another Star-Free Night":

It seems the stars all moved
to some boxcar town in Kansas--
corn you can drown in,
rain like thunder-fall, a giant slide.

There's definitely "corn you can drown in" right now in central Illinois, and it did finally rain a bit yesterday, but I am glad to say my husband and I stood outside as night fell, watching the stars pop out.