In the months of my son's recovery 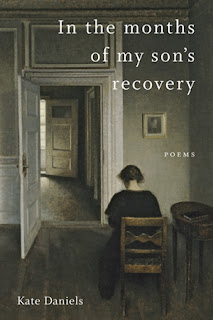 Today's book opens with Kate Daniels's wonderful song of herself, "Her Barbaric Yawp," referencing Walt Whitman's song of himself via epigraph: "I sound my barbaric yawp over the roofs of the world." It's celebration and lament, praise for the aging woman who misses her juice. Great, bold fun, terrific honesty. The honesty continues in the addict's story within In the Months of My Son's Recovery (Louisiana State University Press, 2019), though I should mention her disclaimer via A Note to Readers: "These poems are narrated by a character similar, but not identical, to myself, and represent other characters and situations that may be archetypal, emanating from many aspects of and perspectives on the current opioid epidemic." In the center of the poem titled "In the Midst of the Heroin Epidemic" is the crux of it all:

Addicts destroy
themselves--that's just where we start. And why
they might have wanted to, or if it was an accident
is beside the point... The aftermath is what's at stake.

A partial narrative is told just in titles: "Detox," "Getting Clean," "Relapse," "Recovery." Poems about meetings, support groups. While it is "her" story, and his, her son's, uniquely their own, it is also like every other story of addiction I've ever heard. We know what happens. If only we could stop it! We can; we can't. From "The Brothers," this:

Addiction is a family disease. It infects
each member and distorts their stories. It lives
to breech the boundaries of given texts,
and to change old narratives and destroy
plots you thought were set in stone.

This is a heartbreaking and heartbreakingly familiar story--the addict who steals from his own family to support his habit. The endless worry and stress. And then such a stunning tribute to "The Daughter-in-Law," who climbs through a window to get this man to rehab.

And there's more woe--breast cancer, divorce. What amazing strength and resilience, patience and liberation. To get to "Detachment." To get to "Yes."