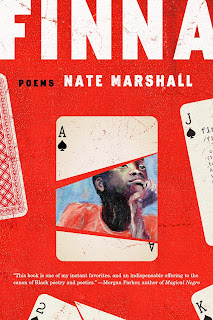 FINNA, by Nate Marshall (One World, 2020), begins with a "landless acknowledgment" containing this line: "we lost the land we were custodians over before i was a twinkle in the eye of a twinkle in the eye of a twinkle in the eye." I love how I get lost in that. I wanted Finna the first time I saw its title, its cover, and I'm so glad to be reading it now for the Sealey Challenge, Day 3. My son wrote "finna" on the window of his car. I wanted to learn from these poems what "finna" means. Thank you, Nate Marshall! The poem "FINNA," an on-beyond-definition poem, teaches me
finna comes from the southern phrase fixing to
like i come from my southern grandmothers & finna
is this word that reminds me about everything next.
even when i've been a broken boy i know i'm fixiing to
get fixed.
I'm learning lots more, too. For instance, that there are lots of Nate Marshalls out there--one a white supremacist--and several poems about these namesakes. In one, these heartbreaking stanzas:
1 time a dude i knew hit me up relieved & shaken
when his timeline told him Nate Marshall had been murdered
but it was a different me somewhere on the North Side.
definitely peace to that Nate Marshall
& to his people who would have been relieved
had i been the news article instead of their sweet, beautiful boy.
I love the poem "step." It begins:
learn this or get out my house
is how mama started my dance lesson
when i was a boy.
And it has this stanza of possible other names:
in Chicago we call it steppin'
but perhaps every Black
neighborhood has some version
they call swing or bop or hand dance or hustle.
The book is full of Chicago, where I used to live, where I visited this weekend and played volleyball on the beach with old friends, family, and new friends, who fed me, fed all of us, like family. This couplet resonates for me now: "but fam, understand, if you treat the fam / like strangers, then you a stranger, fam." I am shy, but no longer a stranger.
I love how some of the poems in FINNA are sideways; some of the stanzas are upside-down. Another definition poem begins
scruples
is the word i tell anyone who asks
for my favorite. what sounded
to me like a doctor's instrument was just a
name for the hesitation respectability births.
And the poem "slave grammar" defies definition:
whole time
i'm writing this down its obsoleting
itself. whole time we talking we ain't got
no dictionary we guessing the spelling
we deciphering the phrases through
our slurs we slurring like we ain't sure until
we murmur a sure vow.
This book has great titles. One example: "welcome to how the hell i talk." Today I went with my mom to a neuropsychology appointment. Today I read the poem "what can be said" in FINNA, that ends:
once Alzheimer's does what it do
you never really have conversations
it's more a man becomes a poem
a lot of repetition & love with something
indecipherable in between.
I think today is/was Tuesday, but "wednesday feels like a funeral" is the poem that says
what i know
of hate
i learned early
& then every
day after that.
I might have a favorite poem in this book. It tells a story and explains the world to me; it's called "let me put it to you like this fam." It gives me a new golden rule: "who you believe in is a matter / of who you mattered to." And it's referenced in the title poem, too, a poem of praise and hope
& it's finna
take on this wide world
with a whole slang for possibility.
Posted by Kathleen at 10:18 PM