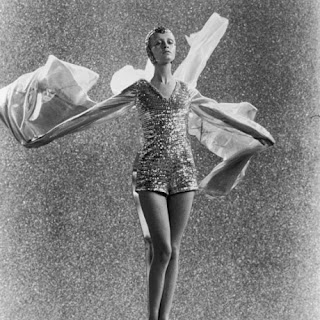 Day 350 of the "What are you reading, and why?" project, and Mary is reading American Years, by Harold Sinclair, for her book club. I've written here about Sinclair before, and he is a popular local read because he grew up here, renaming Bloomington, Illinois, and fictionalizing it as Everton, as you can read here.

And there's more about him here, at the McLean County Museum of History, including pictures! One is with John Wayne on the set of The Horse Soldiers.

Speaking of movies and memory lane, and, as I told CollageMama, who has a fabulous "Itty Bitty" blog of collages, art projects with children, photos, and funny and poignant stories, and who reminded me of Twiggy and her eyelashes in it recently, last night I watched The Boyfriend, in the ongoing musicals project that is causing me to relive bits of childhood and adolescence and question my sanity.

Now I was sure I had seen this movie the year we lived in England, in a really big movie theatre, from way up high in a balcony, and thus from very far away. Holy Eyelashes! That's because a lot of the actual scenes are from the vantage of a high-up balcony, watching actors overact a musical, with the assistant stage manager/understudy (Twiggy) going on for the star, while a movie scout looks on, fascinated and laughing!!

So now I can't recall the actual circumstances of my film viewing, except that the timing suggests I really did see it in London! 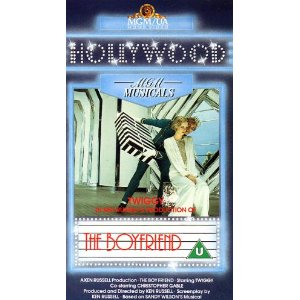 It's a strange and silly film directed by Ken Russell, and I can see me not being able to follow it the first time I saw it, as the stage scenes morph into fully imagined film scenes in the minds of the stage director and film scout, and also into an outdoor bacchanal at one point. I do recall Twiggy as the spirit of ecstasy, and I knew that was Glenda Jackson (the star with the broken leg)!  Wikipedia tells me The Boyfriend was released in the U.S. in a shorter version and that it was never released on DVD, so I don't know what I've got here, but it has some damage in the middle, a few digitized puzzle-piece moments. (VHS at Amazon.) 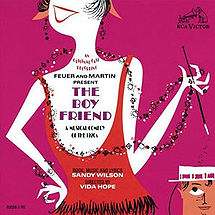 But it's worth keeping for the fabulous dance scenes by Tommy Tune, who tells a little story about being a child star during his American years....

And anybody who thinks I am going to say anything embarrassing about anybody's actual boyfriend can just breathe a sigh of...wiener.  (Don't worry, it's an "in" joke.)
Posted by Kathleen at 7:15 AM

Beating a dead horse, are we now?

Well, a frankfurter, or wienerwurst, is "ie," but, who knows? You might be talking about some other kind of wiener altogether.

What are you, anyway, some kind of whiner?

Yes, you are right, and I am wrong. It's wIEner. I love being wrong. Or is it bieng?

Does The Boyfriend have characters who work in a perfume shop? I don't think I ever saw it.

Hmm, perfume shop. Wonder which one that is? No, but they do go to the beach, sur le plage, you might come up against a rajah...

So, Kim, what you're saying is, you found it in your big red dictionary...?!