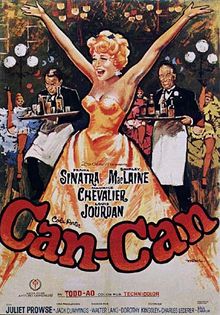 Day 352 of the "What are you reading, and why?" project, and Vickie is reading God Went to Beauty School, a book of poems by Cynthia Rylant, because she heard about it in a Mornings With the Professors seminar on "books your children should be reading."

She sat down on the steps with me, after our exercise class, and showed me poems while I was putting on my boots.  That seemed to fit right in with the earthy, friendly, informal poems about finding Jesus in unexpected places.  Like a beauty parlor, doing nails.

Now I promise you that Can-Can, the film made from the Cole Porter musical, was already upstairs waiting by the double DVD/VHS player to be viewed for possible damage, and I did not watch it last night right after the State of the Union address just so I could say, "Yes, We Can Can!" this morning.

But, of course, I hope we can!  Common sense changes, straightforward solutions, and collaboration, cooperation, and compromise.  How hard could it be?!

Sigh.  Well, if the state of the DVD is an omen, alas.  It started out beautifully, then had little gasps and spurts of digital malformation (some rather frightening and involving displaced body parts), and finally froze on an utterly fragmented scene shortly after Shirley Maclaine went to jail and got out (who knows how?).

Evidently the plot of Can-Can was changed in the course of its career on Broadway, in revivals, and on film.  It was not a big hit in its time, though it was praised and had some memorable songs. Other Cole Porter songs were added to try to make it more popular, but it never fared too well, so my DVD mishap seems to fit right in (like Jesus, on a bus). 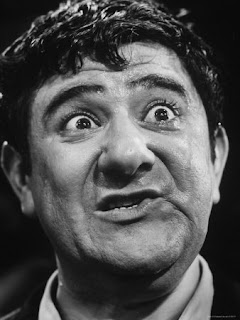 Wikipedia tells us that Nikita Kruschev happened to visit Hollywood during the filming of Can-Can and was scandalized, using it to damn Americans for their depravity, sort of like the self-righteous judge in the plot except that he forgot to fall in love with Shirley Maclaine. (Whenever I mention Nikita Kruschev, I have to mention that I looked a lot like him as a baby.  A cross between Kruschev and Buddy Hackett, due to the black hair standing straight up on my head when I was born.  Fortunately it fell out.  And, yes, Buddy Hackett was in The Music Man.)
Posted by Kathleen at 7:01 AM

Kathleen, what do you have planned for day 365?

Don't know, but it's coming right up, isn't it?! Fireworks? Can-Can girls?

I can 'picture' Nikita Kruschev, because all babies LQQK alike (the Nikita look) some maybe darker than others(me). But Buddy Hacket, Naaahhhh! uhuh! ain't no whey!

On a lighter note; I tought the President highlighted the more salient issues to be addressed. It was a 'good' address, for a State of the Union Address.

The theatrics of intermixing oranges and apples in the seating venue was good for the short term memory holders. Oh wait, that's the whole nation. It does, although temporarily, diminish the vitriol perceptively. Hopefully, the moment will 'contaminate' the concept of 'demonization' as a tactic. Hopefully, this marrying of two negatives, albeit an 'oxymoron', may just yield a positive.

That's 'thought' not 'tought' as in "I tought I saw a puthy cat, I did, I did". My fingers speak before they think, sorry.

I rather like the movie of "Can-Can," although that poster is truly hiddy! The movie isn't nearly that hideous. It's got the absolutely gorgeous song "It's All Right With Me," sung by Frank Sinatra, but I can't remember if it's before or after the place where your tape stopped. Did you get to hear it?

I got to hear Frank sing "C'est Magnifique" in slow motion.

Maybe Nikita got it right. For one thing, the poster says the movie's got Maurice Chevalier in it--definitely a perv. "Sank hey-van for leetle girls" indeed!

But Russians aren't so pure, or else how come my spam filter's always filled up with naughty messages from girls named Tatyana?