A Farewell to Huckleberry Finn 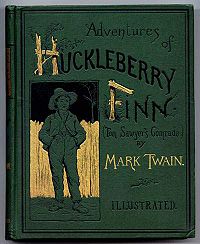 Day 341 of the "What are you reading, and why?" project, and I told you I might tell you why John, from yesterday's blog entry, wanted a copy of The Adventures of Tom Sawyer, by Mark Twain. He had heard that it might never be the same again.

He already has a copy of The Adventures of Huckleberry Finn, the one everybody is talking about, all text intact. The issue is the "n-word" and most teachers and people I talk to are upset, call it censorship, and are not happy about the new edition, coming out from NewSouth Books in February, that will replace the "n-word" with the word "slave."

I tried to reassure John that many editions will still contain the text as it was written, and this one is apparently designed for teaching, for young people, for "community reads," and, as far as I can tell, to avoid controversy of the sort that gets the book removed from the American literature curriculum and/or takes up a lot of time to combat or explain, when teachers are trying to teach and libraries are trying to promote reading of classic or favorite texts.

In short, to make sure the book is still read in the 21st century. Looks like it will be, and that the current controversy has created a demand for the original text.  For both Huck Finn and Tom Sawyer. 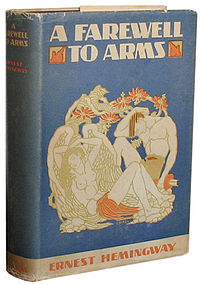 I only just recently learned (or re-learned if I had known and forgotten) that A Farewell To Arms, by Ernest Hemingway, has always been published in its "censored" format, substituting dashes for some particularly offensive swear words. I was handling a facsimile of the first edition at work, and, sure enough, there were the dashes.

Wikipedia lists the omitted words, if you are interested, and also tells us that Hemingway wrote the words back in by hand on two copies, given to Maurice Coindreau and James Joyce. Hemingway's three censored swear words are among "the seven words you can never say on television" made so famous by George Carlin.

Those are also seven words I am not going to use in a classroom, as is the "n-word." But I can read the "n-word" on a page, assign a book or essay that contains it, and handle student papers that repeat it, though I always give my students the choice of rendering it as the "n-word" if they prefer. And I give them the choice of whether to speak it aloud, although I won't say it myself. Discussing this issue has always allowed us to learn a lot from each other in my college classrooms, and I think many high school classrooms can handle it just fine, too. Young people today impress me very much with their generosity, easy acceptance of one another's differences, and general laid-backness, but there's also a lot of crap and bullying going on out there, so I guess we'd better stay alert.

I just hope we tolerate the new edition and it helps in the places it's meant to help. It certainly would solve the  problem of teachers having to provide an alternate text when someone objects to the assigned text. Assign Huckleberry Finn, and if anyone objects, offer NewSouth's edition as the alternate text. Then have the usual conversations and lessons in class.

For that matter, a purist who wants to make a point could ask for an alternate text if this edited one is assigned.  The original.  On and on it goes. 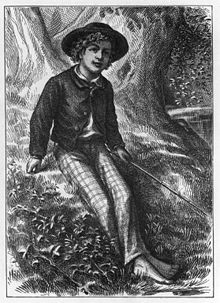 Maybe it just seems easy to me.  Nobody can "whitewash" Huckleberry Finn, not really. What's there is there, and will still be there after the NewSouth edition is set aside. Huckleberry Finn grew up in racist times and was transformed by close association with Jim.  He came to understand that this man was not anything he might be labeled but a fully human being.

I won't be buying the new edition.  I won't be saying the "n-word," either, but I won't try to prevent its use in texts and lyrics.  People who say it can, as long as they can accept the consequences of doing so.

I won't be saying those seven words on television any time soon. Nor, most of them, around the house.

I doubt I will ever celebrate the word "bitch" the way many women now do, though I admire and support those strong women who choose to use it to transform it, just the way the "n-word" has been transformed in some of its uses, though it's good to remember the "n-word" has always had different meanings in different contexts, both historically and now; unfortunately, the insult attached to it is always with us.

And I doubt I will ever accept the "c-word" that is used to insult women.  The Vagina Monologues did not convince me on the issue of the "c-word."  I will say "vagina" and "penis" out loud and in print. There you have them. They are body parts. But I won't just toss them around to be silly. Oh. Yes, I will.

And, by the way, Tom Sawyer's got this fence he won't let you paint.
Posted by Kathleen at 7:00 AM

Thanks for your perspective. Provides me with an optional thought process. I guess I was, initially, upset when first I heard of the exiled head of a demonic dragon, the censorship board (whoever and whereever), peering once again out of it's cave.
I guess I'm somewhat of a purist yet understand the sincere concerns of the well intended. Unfortunately, when that deamon pokes it's head out it's for self serving, personal and subjective moral convictions, with intentions of surreptitiously inculcating them upon the ears of the least aware.

One does not handle with greasy fingers a work of art. All artists consider their art, 'master pieces'. Imagine putting tassels on August Rodin's 'Eternal Idol, 'The Kiss'or a fig on Michelangelo's 'Statue of David'.

Sorry for the rant but to me this is an issue most salient.

Nicely said, Kathleen. While my composition class doesn't read literature, I think I'm going to bring the issue up with them and see what kind of a conversation we have. It's a class on critical thinking and argumentative essays, so I bet I can fit it in. We're also an extremely diverse campus in all ways possible. I love it!

BTW: I wasn't convinced about the c-word either. I might have been the only one in the audience of The Vagina Monologues who didn't chant it on cue, so not sure what that says about me.

I have to admit, I don't get the controversy. If there can be graphic novel versions of classic books, or Jane Austen novels with vampires and sea monsters inserted into her actual text, what is so weird about a different version of "Huckleberry Finn" where the n-word isn't there? So a children's version or a high school version or an elementary school version now exists. So what? Do people really think that some giant hand is going to reach down and do away with all the other versions, the Kindle one, the 125th Anniversary one that was just published in August 2010 and has all the words, the hardcover Everyman's Library edition that has all the words, First Editions, the Cliff Notes version, the illustrated one, the Large Print one, and on and on? For all I know, there's a graphic novel that gets rid of 90% of the words and just has pictures. There is certainly "Big River," the musical, which gets rid of most of the words and inserts songs about pigs and Arkansas. And movie and TV versions that chose whether or not to keep the n-word and all the other original words. All of those different takes on "Huckleberry Finn" exist in the world, and individual readers or viewers can choose any of those that float their individual boats. Just like always.

Thanks, all, for your comments and views.

Sandy, likewise, I did not chant the c-word.