Charge of the Sweet Brigade 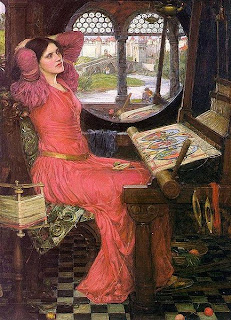 Day 337 of the "What are you reading, and why?" project, and this is the first time I have ever heard of someone so excited to read Tennyson that she got a speeding ticket on the way to the bookstore! A sweet woman called us at the bookstore as soon as we opened yesterday to say that she'd found two books (on our search page) that she'd been looking for ever since childhood.

We located them for her, and before we could call her back, she called to say she was on her way (she lives about half hour down the road), and that she had a list of other Tennyson in her pocket. She called from her car, noise in the background (radio? grown son? talking GPS system?), and once I realized that, I said, "We'll talk when you get here." 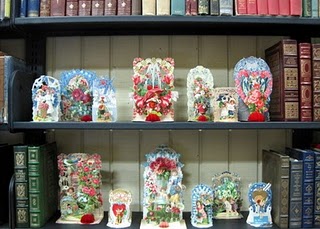 And we did, a bit, and I pulled three more Tennyson books from the counter shelves where we store the pretty ones (thanks to Sarah; see also the vintage valentines!), and the boss took her into the rare book room, where she found some more, and she was one happy lady. I think this might have been part of her son's Christmas gift for her, because she mentioned that she found her Mother's Day gift in our store, too, and told him what he had gotten her on that occasion!

Alfred, Lord Tennyson was the poet laureate of England after William Wordsworth and was beloved by many, even those who did not get speeding tickets! He wrote short lyrics and long narrative poems, often incorporating myth, legend, and history, as in the very well known "Charge of the Light Brigade."  (Poor them...it's the story of a tough battle and stupid military situation during the Crimean War.)

The lovely lady weaving is Tennyson's "Lady of Shallot" as painted by John William Waterhouse.  And here she is in her boat, sick in love with Lancelot. 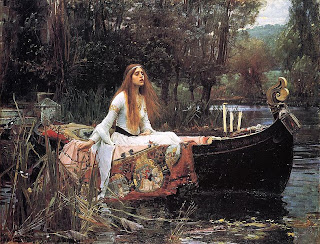 Love how you presented this anecdote both pictorially and by reference. Your soft insight is well appreciated. Your upcoming year will be a warmly comforting one to you, yours and your followers.

i love the pictures you've included with your post.

My entire 5th grade class memorized this poem and performed it with gestures. Very dramatic for a young poet-wannabe. Thanks for the memory!

Do you sell the vintage Valentines?

Yes! Click the blog to see more, and email from the Babbitt's Books site to get more info!