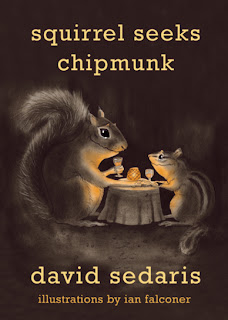 Day 334 of the "What are you reading, and why?" project, and Harry is reading a couple of thrillers, for fun, and brought in some Cormac McCarthy, not exactly fun, and David Sedaris, very, very fun but not Harry's cup of tea, in exchange for them.

I think Dani (of Dewey and Dani) picked up the Sedaris, Squirrel Seeks Chipmunk, which sounds like it could do a lot of mayhem in the animal world.

And I have just finished The Fine Art of Literary Mayhem, by Myrick Land, A Lively Account of Famous Writers & Their Feuds.  It was a lively account, and I liked it even more than Literary Feuds: A Century of Celebrated Quarrels, by Anthony Arthur.  But they both sort of freak me out, and they worked into my conversation with Harry, a philosopher who has lived through postmodernism and beyond.

One wants to hear Buzz Lightyear say that!  Or, as a literary critic might render it, Buzzword Lightweight!

No, really, Harry and I were discussing the harm literature and criticism can do one another if each is struggling to elevate itself above the other.  But while there were certainly feuds between rival writers and critics and writers, this Literary Mayhem book is also remarkable for conveying that sense of respect and responsibility that writers and critics have felt toward one another at various times.

And it made me look up the word "mayhem" which I had associated with riotous disorder and wild confusion but which actually means "the offense of wilfully crippling or maiming a person," which, indeed, some of  the feuding writers did, figuratively, to one another.  And there were some fistfights.

Or "wanton destruction" which makes us think of the streets after the Michigan vs. Ohio game.

A milder example of mayhem given by my American Heritage dictionary is children in the garden, but then ponder all those broken stems and beheaded flowers, and we are back to the maiming.

For "Dover Beach," read by David Kirby, go here.  For more on Matthew Arnold, go here or here. And now off I go to a volleyball tournament, where I hope there will be no mayhem of any sort.
Posted by Kathleen at 8:16 AM

Interesting about "mayhem". My big red dictionary does give a third definition that is more what I always thought:

A state of violent disorder or riotous confusion; havoc.

I'm glad you and your big red dictionary confirm what I always thought, too! But isn't that amazing that the "mayhem" really is from root words like "maihem," "maihaigne, and "mahaignier," meaning "to maim." Indeed, some writers never get over the mean things said about them in these literary feuds.

I saw an etching after this painting at the Kimbell Museum last winter. Your duelling and maiming writers reminded me: http://www.jstor.org/pss/3825755 http://art.thewalters.org/viewwoa.aspx?id=12697
Harlequin and Pierrot both survived the duel.

Thanks, Collagemama! I see you can go to the site and hover the cursor over the painting to see closeups!

I mayhemandhaw when asked a personal question from time to time.

Heheh, just don't do that if your lips are chapped.