Our Hearts are Young and Gay

Day 347 of the "What are you reading, and why?" project, and I will get around to why our hearts are young and gay.  First, to continue the watching of musicals project, I want to relate West Side Story to its other-than-book-for-a-musical book connection, which is Romeo and Juliet, a play by William Shakespeare.  (You can read more about the parallels here, if you don't already teach them!) In fact, I have actually handled the upside-down book version that puts the scripts for each in the same paperback, upside down from each other!

I did not get far into the watching of this last night before I fell asleep...(it had been a long, cold day at the bookstore--no heat at Babbitt's--and at junior high volleyball afterwards), but I did see the stunning overhead views of New York that open the film (after the changing colors of the overture) and the spectacular opening dancing.  "When you're a Jet, you're a Jet all the way!"

And I saw Tony and Maria fall in love at the dance in the gym. 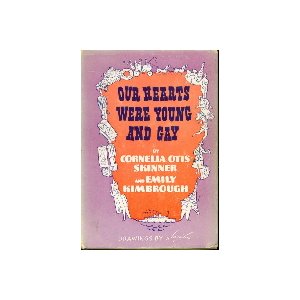 But I am in love with We Followed Our Hearts to Hollywood, by Emily Kimbrough, an account of going to Hollywood with Cornelia Otis Skinner to consult on the making of Our Hearts Were Young and Gay, a film based on the book of the same name that these two very funny young women wrote together about a trip to Europe.  I fell in love with the wild ramble on the two dustjacket flaps, and with the opening account of Emily buying a gigantic window display valentine to take on the train to Hollywood to meet up with Cornelia, and then, I gather, being trapped in her train berth with it.

I would love to snap this book up, intact dustjacket and all, but 1) it's $18 and 2) you might want it or 3) Kim and I should go halvsies on it and then write our own quirky rambling account of some upcoming roadtrip, and then figure out who's going to play us in the movie version.
Posted by Kathleen at 7:16 AM

in english nine we just finished "Romeo and Juliet." we didn't watch "West Side Story." i don't know how students would react to it. we did watch the contemporary version of "Romeo and Juliet," which some students declared the worst movie ever.

Quirky - yes let's buy that book. Then write one. Love, your friend Wacko.

It would be fun reading your scripted ramblings about your upcoming roadtrips especially with your writing skill and humor.

Is the 'snapping cold' of the 'windy city', downtown Chicago, mirrored in Babbit's, Normal, Illinois when their's no heat?

I looooove musicals!! And West Side Story is so excellent.

The other book sounds delightful and madcap. The word "madcap" was invented for books like that!

Hope all is wonderful.

No heat? How barbaric! Hope you are warm today. The opening number from West Side Story is one of my favorites of all musicals, that and Luck Be a Lady from Guys and Dolls.

Nancy, my daughter saw snippets of that R&J at school, too. It sure starts with a bang, as does West Side Story.