Tales of the South Pacific 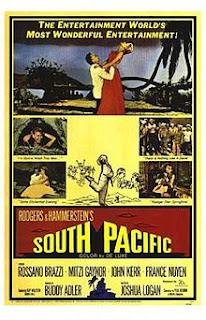 Day 346 of the "What are you reading and why?" project, and Bob, who was going to read The Rape of Europa by Lynn H. Nicholas next, might just read the Edmund de Waal book from yesterday's entry first, due to the book review in the Guardian. (See his comment!) Both are about lost art, the Nazi threat to art, and saving art in and after wartime.

A bit about why I am watching all these musicals: we have stacks of CDs, many taped from special cable television showings, inherited from a family friend who died a few years ago, and some were rain-damaged while stored in, and briefly, covered in plastic tarp, just outside, a garage.  So I am viewing to see which survived, and which are irretrievably damaged. (Gigi was irretrievably damaged, but I got the gist of it, and can go back and read the Colette short story for more. This one intrigued me as our son's first babysitter was nicknamed Gigi, by her mother, our son's second babysitter, who had seen the movie!)

So I am also revisiting my childhood and adolescence, seeing again some movies I had imperfectly remembered.... And I think I first saw South Pacific on a black and white tv, and never experienced the strange intense color manipulation of this particular film. There's the vivid Technicolor of much of the film, in its gorgeous tropical setting (Hawaii, for the filming), but also scenes given a color filter so they appear golden, or pinkish gold, or bluish, etc. 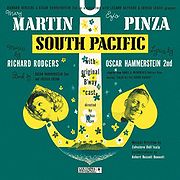 Talk about manipulation! I love the technicolor of the movie, but always vote for Mary Martin. And I was manipulated by today's Writer's Almanac, and made french toast for breakfast for the first time in years.

It's lovely you're revisiting these movies (and by extension, the stage shows.) I saw a touring company of "Fiddler" not that long ago (and reviewed it on my blog -- it was fab) and I've seen "South Pacific" a few times, including an opera company production in St. Paul that was really nice. I *wish* I'd seen the recent revival in New York, 'cause my friend Jon told me it was Not.To.Be.Missed. And I missed it.

I really, really wish they had let Mary Martin do a movie version of "One Touch of Venus." That's the one that really bugs me because a) they tore out 90% of the music, and b) I want to hear Mary Martin sing "Speak Low" the way it should be, as part of the plot. I just don't get the whole Mary Martin thing. She was wonderful, she had a name, she did some movie stuff, so why NOT let her do the film versions of her trademark shows? Especially "South Pacific," which was after "Peter Pan," when every kid in America knew who she was. Hollywood, I tell ya. Nuts.

Well, and then there's the whole Julie Andrews thing--it happened to her, too, so I guess there's a poetic, er, musical cometic (?) justice in her doing the movie version of Sound of Music. But I also love Mary Martin in that!!