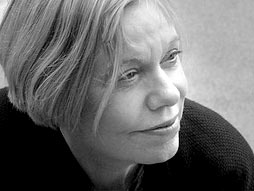 Day 353 of the "What are you reading, and why?" project, and a sweet, earnest man came in to the bookstore yesterday looking for books by Karen Armstrong because he had seen her on Charlie Rose. (Here's her TED bio.)

He particularly wanted her book on Islam, but we didn't have that, and other of her books had gone out recently, but I found for him The Case for God and The Spiral Staircase, an account of her life in the convent and why she left.

We stood at the register for a while, waiting for Sarah to get off the phone so we could run his credit card (small business quirk) and talking about compassion in the world in times like these, or in any times.  What we have in common.  It was a small, sweet moment of connection with a stranger.  Now we are less strangers. 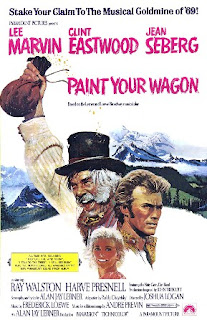 And what could be stranger, you might ask, than the American theatre convention of musical comedy?  And, I might answer, a musical comedy western! I refer, of course, to Paint Your Wagon, starring Clint Eastwood as a singing Gold Rush guy, along with Lee Marvin, and a bunch of men in No Name City.  Then along comes Jean Seberg, gorgeous, and married to a Mormon who has another wife, so, upon demand of the lonely men, up for auction.  Tit for tat, so to speak, Jean is eventually interested in having two husbands.

But it's a 3-hour film, and that's when I fell asleep.  Memory and Wikipedia assure me that all hell broke loose and literally swallowed up this Gold Rush boom town with fancy ladies in it from a kidnapped stage coach, etc.  I didn't actually get to hear Lee Marvin sing "Wand'rin' Star" in his wonderful drunken gravel, but I did hear Clint Eastwood sing "I Talk to the Trees."  The plot of the film is quite different from that of the stage musical, which I've never seen.  Does anybody do that anymore?

And to bring in a pertinent book, I own and have read Played Out: The Jean Seberg Story, a biography by David Richards, given to me by my parents one Christmas.  They were frequently giving me biographies and autobiographies of actresses during my own high-school musical years, and, back then, it was sort of hard to read why...  Were they supporting me in my vague career choice, or warning me?  Played Out is certainly a cautionary tale. 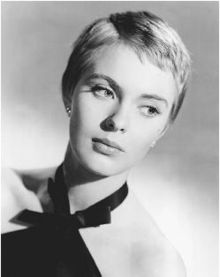 In retrospect, of course, I see that 1) my parents were always supporting me, but 2) wanted me to be clear eyed about the realities of a career in the theatre, and 3) probably hadn't read these books themselves.  But, hey, the front flap of the dustjacket starts, "Jean Seberg was forty when a policeman in the 16th arrondissement in Paris discovered her disintegrating body under a crumpled blanket in the back seat of white Renault."

And Seberg took up writing later in life.  Hmm.  1) Thank God I've never played St. Joan (Seberg's first big role, after those high school plays she starred in, and, alas, a major film flop) and 2) Thank God (whatever God is) that, at 40, I just pierced my ears.
Posted by Kathleen at 7:21 AM

I bet you were a pretty good stage performer.
A common thread, I also got my left ear pierced when I was 40. My subtle attempt at escaping from the conservative context of which I reside. It was somewhat of a liberating experience and a 'tom foolery' to those that thought they knew my 'MOS'(military acronym for military occupational service) let alone had me categorized as a product of Indiana's conservative demographic.

Well, with jacket copy like that, now I want to read that Seberg biography. Wow.

those moments where we connect with a stranger are priceless.

I know, sheesh! Intense! No messing around there.

A sweet follow up: Today the "stranger" returned to bring me a New York Times article on the film "How To Die in Oregon," now screening at the Sundance Film Festival, something we had discussed in our brief time together at the register. His name is John, and I will be keeping an eye for those Karen Armstrong books, on Islam, and an earlier one, on the Apostle Paul.

"The plot of the film is quite different from that of the stage musical, which I've never seen. Does anybody do that anymore?"

Does anybody do what anymore? "Paint Your Wagon" as a stage musical? I think it's done occasionally.

We are pleased to be working on a documentary film about Jean called, "Movie Star: The Secret Lives of Jean Seberg." It's the first film to have the cooperation of Jean's family and friends. We have exclusive access to home movies, family photos, etc. Much of what is available on Jean is not factually correct. We hope "Movie Star" will set the record straight and honor Jean's important role in the history of cinema.

How exciting, Kelly! Thank you for letting us know! She was clearly a talent, and a sensitive person. It will be good to learn more about her.

Kathleen, you new friend might also like "Reclaiming Beauty for the Good of the World: Muslim & Christian Creativity as Moral Power" by George Dardess and Peggy Rosenthal.

Armstrong's Charter for Compassion was her TED wish.