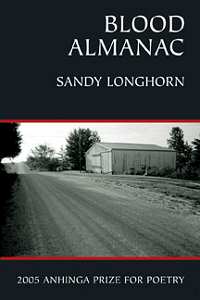 Day 328 of the "What are you reading, and why?" project, and I confess I am still going to tell you what I am reading, and pummel you with small glittery bits of coincidii, but I will surely talk to other people soon, probably as soon as this afternoon, at work, about what they are reading, and you can also check the blogroll to find lots of year-end book lists, plus all those "best of" lists at news sites, but I have been reading Blood Almanac, by Sandy Longhorn, and it's gorgeous, and, as is my wont, I want to share some stone coincidii, as the January river of stones ripples on...

When I read the very first poem, "Black Dirt Girls," I knew I would love this book, as I grew up on the fertile prairie, too, all that black dirt, and "tall grasses, / bent by heads bursting with grain, were lit / with hosts of lightning bugs tilting like drunks."  Great image, huh?  We see the fireflies and the grasses, but it also sustains itself factually, with grain alcohol intoxicating the metaphorical heads of the prairie grasses, or wheat.

Of course, I mostly saw the fireflies in corn rows, or hovering over beans, whatever was planted that particular year.  And still do, as my parents still live in the same place, and I spend lots of time at their farmhouse, in all seasons.

Sandy Longhorn is a poet I have met here in the blogosphere--hers is the Kangaroo blog in the blogroll!-- and we exchanged books at Christmastime!  You can click to buy her book at her blog, or here, the Anhinga Press site, where you can also see sample poems and the full book design credits.  The cover photo is by George Byron Griffiths.

And the title of her blog is an Emily Dickinson quotation, a memorable phrase from one of her letters to Thomas Wentworth Higginson.  So you know I was bound to love Sandy.  I sent her an Emily Dickinson collage bookmark with shiny rain and a button on it, and she sent me one of her poetry collage cards.  (So now I admire her ability with glue as well as poetry.)

OK, and another coincidence of love--the title "Black Dirt Girls" is inspired by the title of an Emmylou Harris song, "Red Dirt Girl," as Sandy says in the notes at the back of the book!  Yay, Emmylou!  I confess I have looked at the Notes before finishing the book--I am halfway through--as this is a full collection, not a chapbook, and I need to read it slowly and to re-read it; poetry takes great attention.

Remember yesterday, attention, and that river of stones?  So here is what I wanted to tell you.  The poem "Fence Line to Hill Rise" tells about the boulders left behind by the Laurentide Ice Sheet, huge rocks that encounter the plow, glacial residue that contributes to the good black dirt, and then here's the last stanza:

Smaller stones rise up each year,
heaved to the surface by frost
to clank against the disk blades,
forcing us to reclaim the fields.
The earth gives birth to what it wants,
fodder for cairns at the fence corners.

(Ah, again the words do their double work--"frost" is what it is, and the earth does what it does, and the rocks are there for building cairns, but in the background of this poem is Robert Frost's poem, somehow, "Mending Wall," without any trouble at all--of course, Frost's name is its own metaphor--just "echoes of receding ice.")

On a granite boulder in the poem "Labor Day on the Bremer Blacktop" you can see the "sun catching mica flints / in the rock's grain, / dazzling as any city skyline at dusk."

There was mica in yesterday's book, too, Stone for an Eye, by Karen Craigo, in poem VI:

I like to think it's mica
that glistens in this stone--
they make windows
from mica, and that's
a handy metaphor.

I first encountered mica, or "fool's gold," in the Black Hills of South Dakota, and was forever charmed by it, still caught in the glitter of childhood memory.

Back to Blood Almanac, and "June," in which Sandy Longhorn provides a list poem, inspired by the structure of a Lucie Brock-Boido poem (credited under the title and in a note at the end of the book), of what "I am," as "June" comes in a section of 12 self-portrait poems, each a month of the year.  In "June,"

I'm just about to start the "Listening in the Dark" section now, which will contribute to my January attentiveness, I'm sure.  But here is an image and a stanza from "December" for you, that relates to Craigo's mica windows and the month we've all just finished:

Winter is made of this muteness and these windows
and the long view of white fields through icy glass
where nothing moves and nothing raises its voice. 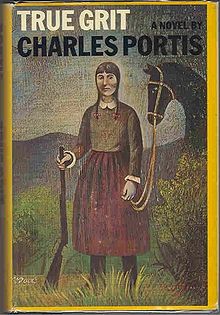 And now, dear reader, it's been a couple paragraphs since my last confession, so I will say that, while I confessed to not even knowing that True Grit was based on a book when all the hoopla about the film remake was going on, and people started wanting the book at Babbitt's, now that I have actually seen the new film, and been reminded of the book's original cover, I confess simply to memory challenge. As I was watching it, I remembered reading it! As a child, too young to get everything, but remembering the language and certain words--braggadocio--and having to look them up or ask my mom, and, oddly, the actual page and typeface. I probably got the book from the library. I remember being concerned about snakebite.

And who recalls the snake in the grass scene from Elsie Dinsmore?! And, ah, Emily Dickinson..."A narrow fellow in the grass."

Anyhoo, I loved the film, seen yesterday at the theatre. I always forget how loud movie theatres are, but my mom didn't forget. She remembered not to wear her hearing aid!

And what a delightful surprise at the end of the film to hear my girl, Iris Dement, singing "Leaning on the Everlasting Arms"! But if I start talking about Iris Dement, I'll never end this blog entry. Bye for now.

Except to remind you that there's lots of blood in True Grit, and there will be more to come from the Blood Almanac!

OK, one more tiny river-of-stones coincidental thing: this morning I paid attention to frost on the window glass! OK, two little things. Blood Almanac also makes me think fondly of "Sestina" by Elizabeth Bishop, with its recurring almanac!  OK, really, goodbye. You hang up.  No, you hang up.
Posted by Kathleen at 9:36 AM

Oh, my dear, Kathleen. What a great surprise to click on your wonderful blog and see an image of my book. Thanks for the super review...and to be included with my fellow Arkansan, Charles Portis, well that's just double the fun. You rock, my friend!

Yay, Sandy! Yay, Charles! Yay, Arkansas. And you were somewhere safe from the worst of the recent weather, I trust.

Kathleen,
Thanks for such refreshing interpretations and references on poems and movies. It's nice to see that you have started, already, with your 'resolve' of being more positive and distancing yourself from cynicism of which you spoke about in a previous blog, 'stone for an eye', I believe. This will also be my pursuit, attempting to distance myself from cynicism. First step is choosing to extract my self from personalities that have a tendency to 'prick' me with that stinger of cynicism. Also, your intro to 'River of Stones' concept will also be an attempted endeavor.
Lastly, not knowing that True Grit was a book and I recall watching the John Wayne version of the movie, I was not that fond of the narrative. Not a big fan of John Wayne's persona, either. Ooops, am I being cynical? It's just that his persona seems to portray the school of 'bigger is better', 'fists rule', the portrayal that this is 'America'.
Anyway, have to go lift this large stone.
Have a great day and week, in perpetuity of course. Ciao!

Nene, the remake of True Grit is closer to the book (though films do have variations usually) and Rooster Cogburn is played as a rich character, not an icon! I was also reminded (thanks to Google) that there was an actual movie called Rooster Cogburn, a sequel of sorts, with John Wayne and Katharine Hepburn.

River of Stones is not my project, but I am among those spreading the word.

Kathleen,
Loved this post - it was educational AND musical. I like to know when 'words are doing double work' because I don't always know! Thank you for revealing the deeper meaning of a poem. There are so many layers to poems that I sometimes feel as though I just scratch the surface. But, when I make the connections and they are done well it makes my brain light up with sparks.
I could hear Emmylou and Iris singing, too, this morning. After seeing the movie last week, we stayed through the credits to hear her sing. It was a hymn of my childhood that I hadn't heard in a very long time.
Happy New Year to you!

I stayed through the credits, too!