Stone for an Eye 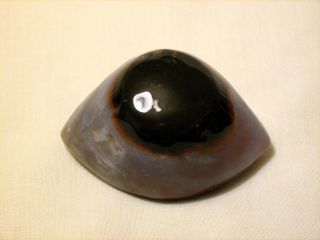 Day 327 of the "What are you reading, and why?" project.  HAPPY NEW YEAR!!  It's the first day of 2011, and we're going to see True Grit this afternoon to celebrate with my mom and dad (who took me to see the original film, too).  Read the comments under Auld Acquaintance to see what a lot of people are reading as one year ends and another begins!
Because today is also the beginning of the current river of stones project, and because I mentioned this book earlier, I want to share some poem excerpts from Stone for an Eye, by Karen Craigo, from the Wick Poetry Chapbook Series.  (This series is published at Kent State University in Ohio, coincidentally my mother's alma mater.)
This book is 20 numbered poems, beginning with these lines:
You won't live to write
an elegy for a stone.
I appreciate the line break, causing me to catch my breath at the idea that I won't live to write, before I carry on to the stone's permanence.  I am invited to praise the stone, and I do, and then told, "Love / that it is humble, its raiment / plain" and I do this, too, noting the word "raiment" and how the stone, so humble, is also now clothed in spiritual language.  "Remember, it never flies / of its own volition."
And then this:
Assume the stone's great sadness
is the verb "to stone."

That is sad.  I can't help but think of Shirley Jackson's story, "The Lottery," but last night I saw the film Dogville, so now I think of that, too.  The stone's great sadness is related to what people do with stones, which can be to harm one another.

The poem ends, "Don't make too much / of its attention.  The stone / is not listening to you."  I love the coldness of this.  And the human longing.  And the mention of "attention," which is what the river of stones project is about, and what all poetry is about, to me.  Paying attention.

Paying attention.  That is another thing humans do, and must do, and should do.  And sometimes don't do enough.  "Attention must be paid," says Linda Loman in Death of a Salesman, by Arthur Miller.  And it must.  I may not live to write an elegy for a stone, but I hope to pay attention every day, and, in January, to write a little about it in a personal handwritten diary.  Sometimes I might tell you about it here, too.

Yesterday I watched seven or eight squirrels run around the yard in the sixty-degree weather in the rain, running up and down the trunk of the sweetgum tree, running over to the evergreen shrub to leap out of it, running back to do it again.  A rabbit joined the fun for a moment, then sat and watched the squirrels, just as I was doing.  Ah, and it is the Year of the Rabbit, yes?

"Anyone can love nature," says Craigo in poem VIII:

The trick is to love
the world--love
its hunched-over people,
each guarding something
heavy and beautiful.

Love even a Willy Loman, hunched over in his pain.  Love the world after watching Dogville, after listening to "Dog Eat Dog" by Joni Mitchell.  The artists who see it clearly, say it clearly, yes, they help us love the world, anyway.

The next poem, poem IX, is a series of unpunctuated, uncapitalized questions, ending with "does God have a stone / for an eye" and giving the book its title.  This book took me from my petty concerns and deposited me in a river bed, to learn something new and to learn again something old, from a stone.

Teach me permanence--
how you don't move
unless moved, and when you land
you land forever.

In poem XVIII the stone is compared to a shell you hold to your ear to hear ocean.

But a stone makes
no sound.  Hold it
all day to your head
and you'll begin to know
a humming.  The stone
is lost in meditation.
It's a bit like you
when you're sleeping--
wholly reliant upon
the world's swirling mercy.

Oh, I love that "swirling mercy." And then you wake up.  Wake up. And pay attention.
Posted by Kathleen at 9:57 AM

Great review! I've been down and out the past couple of days (head cold) but am slowly returning to a functioning level. Just have to say that the photo here made my eyes tear up...too much like a gelatinous eye, but beautiful too. Love it.

Made me want to run out and find Stone for an Eye. Also Lars Von Trier makes films that are difficult, dark, and somewhat uncomfortable, I think. But he makes me think. Dancer in the Dark is about as dark as a musical can get.

Great review - makes me want to read the book! Here's to many lovely stones this month.

A weight is on my chest, but a polished stone is in my palm. Nice post, bending my respiration.

Really nice analysis. I'll have to check out this poem in its entirety.

I'm also going to try and do the river of stones project, I've decided, because I think it will make me take the time to write about some things I don't bother with elsewhere. Like you, I'm looking forward to the idea of handwriting it in a journal. Happy New Year! I've spent my whole day working at our annual calendar and hardback sale. I guess it's been awhile since I've done it because I had no idea how fanatic people can become over calendars!

Love the connotation, my interpretation, of '...when your sleeping---
wholly reliant upon the world's swirling mercy'. It pulls my strings of the question;
Is it a state of inexplicable 'determinism' or just the reality of 'it is what it is', absent of external forces (existentialism)?

A reflection upon the 'taoist' exercise of releasing oneself of the ego, selflessness, becomeing that which surrounds, ie, the stone.