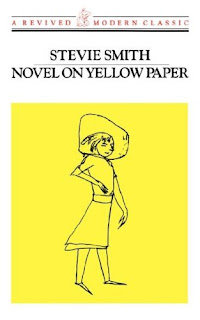 Day 343 of the "What are you reading, and why?" project and Carolyn is reading Death of a River Guide, by Richard Flanagan, because she got it for Christmas.  Flanagan is an Australian writer, and the main character is a Tasmanian river guide who gets to revisit his past and look back on his life in an amazing way.

Carolyn, in New South Wales, is suffering from the humidity but is not in a dangerous flooded area.  She recently finished 45, by Frieda Hughes, a book of 45 poems, one for each year of her life (published when the poet was 46), looking back on both the innocence and devastation of being the daughter of Sylvia Plath, and perhaps a good one to read alongside Birthday Letters, Ted Hughes's book of poems to his dead wife.  Carolyn and other readers, alas, have found 45 to be "disappointing."

Soon she'll be reading Novel on Yellow Paper, by Stevie Smith, because she found it in a used bookshop.  I love Stevie Smith as a poet of hard-edge whimsy, but some find her "disappointing" as a novelist.  I love the strange and marvelous film Stevie, starring Glenda Jackson, but can never find it anywhere since I first saw it in a movie theatre.  And, as I recall, it's based on a play! 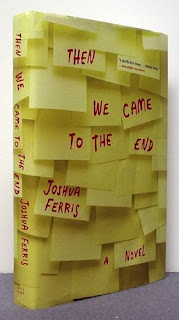 And soon my book group will be reading a novel covered in yellow paper, er, post-its, or, rather, probably the paperback, with a different cover than this one, Then We Came to the End, by Joshua Ferris.  As Amazon puts, The Office meets Kafka.  Which reminds me of another film I love, Brazil!!

Today is Martin Luther King Day, so I am looking back on his legacy and also my own childhood and adolescence, growing up in unawareness and then awareness of the civil rights movement in the United States.  I spent part of my childhood in the South, so I know that affects my reaction to the NewSouth edition of Huckleberry Finn and the "n-word" controversy.  It's why I cannot and will not say the word but respect anyone's right to read and write the word, not to forget the troubled history rooted in the the language.  And also why I respect anyone's right to avoid the word.

Yesterday I spoke with a woman who works at one of the local public libraries, which is keeping the copies they have (except the falling-apart ones) and ordering some of the NewSouth editions, so the book will be available to patrons in both forms.  She acknowledged that someday the library might only have copies of the new edition, which upsets some of the older librarians, but that's only until another new edition comes out, restoring the original language.

It's a matter of what holds up during repeated use.

I will ponder that for a while.  The actual book, as a concrete object, being held in the hands and read till it falls apart.  And the meaning of words, being held and used in the mouth and mind, likewise.
Posted by Kathleen at 8:51 AM

One cannot control how it's interpreted by the eyes it falls upon. By changing the word as originally printed insinuates intended control of it's interpretation. One can choose not to read the printed word which is unlike the oral progection where it may fall upon unsuspecting and unintended ears.

I just found the post-it covered Ferris at Babbitt's!

Ooops! 'projection'. See, exactly to what I was referring, misinterpretation(lol).