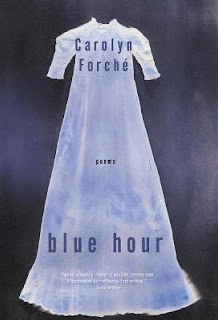 You already know the coincidence of blue here, from the title and color of the book cover, which is a photograph from the series "My Ghost" by Adam Fuss. But here is the August coincidence from Blue Hour, by Carolyn Forche (HarperCollins, 2003): "Our windows faced east, and on August evenings, the sky was a blue no longer spoken." And it's also a Blue Monday in the blog.

The "blue hour," as the helpful Notes at the end explain, is "the light the French call l'heure bleue, between darkness and day, between the night of a soul and its redemption, an hour associated with pure hovering." It is the hour she would wake with her baby son. From the title poem: "When my son was an infant we woke for his early feeding at l'heure bleue--cerulean, gentian, hyacinth, delft, jouvence. What were also the milk hours."

Other favorite lines and phrases, some blue:

"In the blue silo of dawn, in earth-smoke and birch copse / where the river of hands meets the Elbe."

"a confusion of birds and fishes"

"a memory through which one hasn't lived"

"pinning their intentions to a saint's dress"

"meaning did not survive that loss of sequence"

"something broken and personal, a memory"

"the stories nested, each opening to the next" 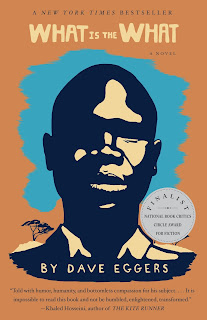 I should have anticipated this, as Forche is a poet of witness, but I didn't expect how strongly Blue Hour, especially its long abecedarian poem "On Earth," would connect to the other book I am currently reading, What is the What, by Dave Eggers, a novel based on the true story of Valentino Achak Deng, one of the Lost Boys of Sudan. He and other orphans walked from Southern Sudan to Ethiopa, hoping for aid and relief, witnessing terrible things, including the murder of parents, siblings, and friends, beatings, death from hunger and fatigue. Some of Forche's lines stuck out as something one of these boys might see: "in this camp, so many refugees" or "the little notebook of poems in the pocket of a corpse." "On Earth" has beautiful things in it, but also terrible things, a litany of everything that can and does occur. This couplet in it even matches the novel's title in a way:

as does the litany of "what" in the W section of the poem. And the ending, of the poem, since the beginning of the novel recounts a robbery: