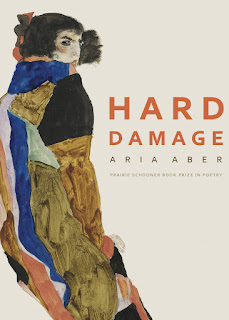 This one had poem after poem of gripping intensity and experience unlike my own, so I read it as if looking into a new world. Hard Damage by Aria Aber, winner of the Prairie Schooner Book Prize in Poetry and the Whiting Award (University of Nebraska Press, 2019). But it is my world--America with its covert actions elsewhere in the world (once her parents' homeland) and full of privilege (of which she and I both partake). And it isn't my world: it is refugee camp, Afghanistan left behind, and languages I don't know but deeply appreciate, as explored in these poems.

Here in Hard Damage I find grenades compared to turtles and also "grenade" connected to pomegranate in etymology:

Grenade, its shape
so much like the fruit they named it after,
pomegranate, from Latin pomum granatum
(apple with many seeds), something
I can harvest and pick from a tree--
a comfortable taste in my mouth, and yes,
fruit of the dead, or of fertility, depending
on whose sustenance to listen to.

I find connections, of course, to the other books I've been reading here in August for the Sealey Challenge--for instance, a mention of the month of August itself, in the poem "Foreign Policies," one that moves from and shifts back to the more personal poems in the book to the more political: "August, too, was a mastermind, distracting me / toward your lima bean eyes."

And the color blue: "the blue uncertainty" of "Asylum" in a refugee camp, and "Rilke, blue prince of the lyric I, comes to me often." In "Operation Cyclone," a father, "his voice is blue shards of a dinner plate / atop a compost heap." In another part of that same long poem, a brother-uncle-son, lost, imagined in the section called "Interrogation Chamber": "The blue light censoring his face." And the sentiment that might somehow save us all: "If, despite relentless blue, despite snow, you dared to hold me / and I dared to be held"

Connections to Here, by C.S. Giscombe, in a way, to the idea of "here," as in Aber's poem titled "Here," "We sip Arabic coffee and warm our faces / by the oven, which glares at us with its black snout." (Also, a poem that contains this fabulous simile: "ice / falling from fir trees like books pushed off a shelf.") And in the poem "Alles/All," how "there" compares and contrasts to "here," creating two kinds of place:

"From the back, in my car seat, I'd protest: No, AFGHANISTAN IS MORE BEAUTIFUL. IT HAS EVERYTHING THERE.

You'd laugh, somewhat confounded: You have never been there.

Here: You and I in a car, green fields of cattails, the summer night warblers gossiping, the sky lowering its clouds like marbled ham toward us.

Here: All that there is."

I find it remarkable that this poet so deeply remembers a world she can't really remember--too young, gone too long--through her relatives' memories, stories, and her own research. And creates it here so well! She loves and honors her mother, who spent time in prison for revolutionary action. In "Lass/Let," one of the poems that examines meaning via a single word in German and in English, we learn:

"My mother let me happen to her. She let prison happen to her, simply because she believed in Women's Rights and Afghanistan as a sovereign state. She went to prison with her little sister, and she emerged." The story continues in the poem "dir/You": "You, I said to my mother, have been to prison. But she cooked on in the kitchen, ignoring me. Or, she scratched and peeled the wallpaper, weeping...."

It's a beautiful book, with terrible things happening in it:

"the woman, 34, revolutionary socialist, killed by the mujahedeen, was found with her head in her lap: wearing an earring, red lipstick, a book of poems in her jacket"

Because it is a beautiful world, with terrible things happening in it.