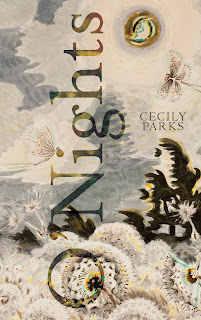 The wonderful title for this one, O'Nights, by Cecily Parks (Alice James Books, 2015), comes from a bit of dialogue quoted in Henry David Thoreau's journal, a Goodwin speaking, saying, after a bit of age guessing, re: Emerson vs Thoreau, "But he has not been out o'nights as much as you have." On this gorgeous, breezy summer day, I was outside for most of it, and so was this book, and, I gather, so was the poet, while writing it! Are these eco-poems? Nature poems? Or "postpastoral" poems, as in the poem actually titled "Postpastoral"?

I borrowed an axe
so heavy I had to drag it
through the woods.

This stanza from it reminds me of the movie we watched last night, Land, a Robin Wright project, recommended by a co-worker (a recommendation I heartily pass along to you!), even though the axe in the movie mostly stayed closer to home...in the wild.

I love learning stuff in poems, and, in "When I Was Thoreau at Night," I learned that "Peregrine," a human as well as falcon name, means "wanderer." In that same poem:

Oh, yes,
I wanted the world to be wild again. I believed

I might hold weather in my hands
and mend it.

That, and the opening poem, "Hurricane Song," make me think that this is a book in tune with and in defense of the environment.

Now let me tell you about the random coincidii and the many mentions of the moon! (Sun & Moon is the theme of the upcoming open mic at the public library, so the moon is on my mind, as is the caveat against the moon in poems, which always makes me so glad to find the moon there!!) The moon:

"I believe it's all this pollen that dizzies me." (It was a high-pollen count day in central Illinois today!)

Just yesterday I heard the first/only (?) ice cream truck in the neighborhood, and here's a poem titled "Girls Ride Shotgun in the Ice Cream Truck."

Lots of blue in "Blue Oat Grass Epithalamium" (as is some previous books!)

I just read (outdoors!) in the current issue of Vanity Fair a reference to Virginia Woolf in the article about Joan Didion and Eve Babitz, and here in a Note at the end (p. 77), referring to the title of a particular poem (p. 5), "The Swallow Dips Her Wings in Midnight Pools," is, of course, Virginia Woolf!

The book is published by Alice James Books, and there is a poem titled "Alice James" and a Note about William James. Er, more than coincidence?!

In a way, the poem "Pilgrim" confirmed my connection to the movie, Land:

Then I'm going to tell him how I lived
in the wild: I ran out of electricity
one autumn and camped outside,
sleeping by a stump whose rot
coincided with my idea of discipline.

When I ran out
of conversation, I came inside and made amends
with my home, my socks, the length
of autumn. I doubted the winter
so fiercely that my electricity stayed lost,
I was going to practice being a pilgrim forever.
I was going to worship my head lamp
until its battery ran out. I thought better.

I enjoyed this book. I did not know that Thoreau set fire to the forest. Yikes! I love how, in "I Have Set Fire to the Forest," and other poems, she wears a dress on her walks in nature:

If I were
Thoreau, Spring would make me want

Like the pussy willows
I know I'll bloom eventually
and when I do, people will want to touch me.