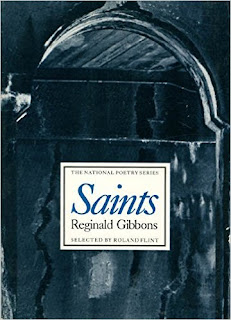 My copy of Saints, by Reginald Gibbons (Persea Books, 1986), with its faint scent of damp, belonged to someone else, is signed and inscribed, somebody local, now gone. I am reading layers of lines in it, what's written, how this book's previous reader may have received it, and my usual and ongoing connections to other poetry books I've read this August. As I mentioned yesterday, this title seemed like it might be good Sunday reading, and I turned first to a poem called "Sermon of the New Preacher," which is exactly that, a sermon, in prose.

The preacher is exhorting his listeners not to make excuses for their crimes of the heart:

But Brother, you say. Brother, I have needs, I'm in trouble, or I'm in pain, or I have sorrows and worries and wounds! I'm in debt, and my son won't straighten out, and my wife doesn't love me the way she once did, Brother, I'm talking about me!

The marriage lament reminds me of lines in Corinne Lee's Pyx, and there is a similar loving wish for childen in Gibbons's "Elsewhere Children" but now for everyone's children, and the lost children of the homeless woman in a doorway: "As for wishing you always free of ordinary pain

like a father's or a mother's, I might
as well wish food into dead refrigerators
and the warmth to come out of these store-windows
into the street and do some good.

Gibbons's own tender domestic poems alternate with poems of public concern, several in Chicago settings I recognize, having lived there, and poems in other voices. "The Vanishing Point" shows us a man drawing "a severely rectilinear highway scene" in the subway station at Chicago and State. (Been there.) "American Trains" resonates with the train-riding poems in Dynamite, except Gibbons is mostly writing about passenger trains and Carlson-Wee was riding the rails via freight trains. Right up until the end, where the train also becomes metaphorical, I think:

and there's the one you and I got on,
that started downhill with the weight
of what we felt and is still a plummet,
always and always faster till it has us shaking,
out of breath, scared... "A freight train,"
I said when you asked me, "What is this?"

The section/long poem called "Saints" begins with an epigraph by Allen Tate: All violent people secretly desire to be be curbed by something they respect, so that they may become known to themselves. Gibbons incorporates the epigraph in the section called "In the Violent Ward," adding his own wisdom in the voice of the violent, or once violent:

we can't be sure we want to get well---
once you go out, time starts again
your wounds may heal
and you'll want to wound someone.

That does seem to be the way of it, so often. And Gibbons has also described and anticipated the current state of the political world in America in this stanza from his sad but rollicking "The Snarling Dog (A Song, Loud & Rough)":

Have you heard people tell of the danger to us all
when this one's elected or that one breaks jail?
It's twice what you heard anyone tell
and they got the snarling dog on a chain at heel.

Well, the dog days of August are officially, almanacally over, I guess, but I'll be out there today, forecast to be hot and humid, for the local Sweet Corn Circus, with circus gymnasts and steamed sweet corn in the streets, right after church.