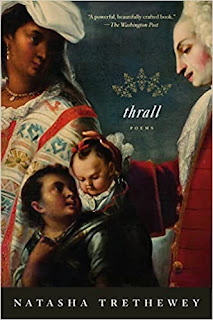 That thing is happening, as it did last year, and probably in previous years of the Sealey Challenge, where I find I am reading poems in the month mentioned in the poem--that is, August. In "Elegy," the very first poem in Thrall, by Natasha Trethewey (Houghton Mifflin Harcourt, 2012), it is late August, and we are still in early August, but still...

And other coincidences continue. Yesterday, I told you about finding my friend's pencilled notes in the book I was reading. Today, in "Illumination," the last poem in Thrall, I find "this secondhand book   full / of annotations   daring the margins in pencil."

It's a beautiful elegy, by the way, for her father. It recounts a day fishing together, his "defeat" casting, his boots heavy with water, and her small success, the catch and release of two small trout. But a coincidence that stood out for me was her awareness of using him, in a way, for poetry, and how that connected to Diane Wakoski's commitment to poetry and complicated connection to family. Trethewey says,

I can tell you now

that I tried to take it all in, record it
for an elegy I'd write--one day--

when the time came. Your daughter,
I was that ruthless. What does it matter

if I tell you I learned to be?

Trethewey's "Elegy" is all love, despite the named ruthlessness, but the poems speak of other complications, notably the mixed-race marriage of which she is the product. Many poems in Thrall are about paintings that depict black and white mixings of family, painter's model, or even, in "Miracle of the Black Leg," body and limb--"black donor, white recipient"--an astonishing thing/"myth" to consider. "Taxonomy" discusses, using the language of the past, "mestiso," "mulato," "castiza." And the title poem, "Thrall," is about Juan de Pareja, "the slave of the artist Diego Valezquez," as the note at the end tells us, and an artist himself, as well as "the mulatto son / of a slave woman

In the touching poem "Enlightenment," father and daughter discuss Thomas Jefferson over time, revising their understanding of him, his relationship to Sally Hemings, and each other. On a tour of Monticello, she teases her father:

This is where
we split up. I'll head around to the back.
When he laughs, I know he's grateful

I've made a joke of it, this history
that links us--white father, black daughter--
even as it renders us other to each other.

As heartbreaking as the "Elegy." 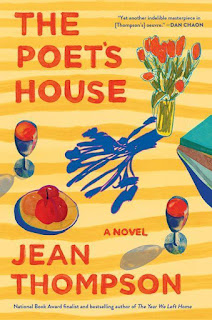 And maybe I needed a little joke, too. Something made me pick up The Poet's House, by Jean Thompson, from the new shelf at the library today. Probably the title, right? After reading about Diane Wakoski's pettiness and jealousy yesterday in Greed, Parts 5-7, the epigraph made me laugh: "...and thus cruelty, envy, revenge, avarice, and the passions purely evil, have never formed any portion of the popular imputations of the lives of poets." --Percy Bysshe Shelley, "A Defence of Poetry." Mmhmm.
Posted by Kathleen at 5:47 PM