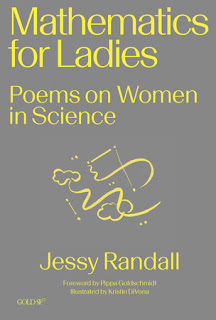 Yesterday I got a package in the mail from England! With a book in it: Mathematics for Ladies, by Jessy Randall (Goldsmiths Press, 2022)! I'll be reviewing it for Escape Into Life, as Jessy Randall is an EIL poet, and you can find several of the book's poems here (Women in Math and Science), here (Three by Jessy Randall), here (Work Poems), and here (Dog Days), but this Sealey Challenge reading in August will be my first quick, holistic read-through, and I'll peruse more closely in subsequent readings. For now, I will point out the coincidence of Mary Anning and ammonite in two of these poetry books this August, this one and The Genesis Machine! (In my notes: Have Jessy Randall and Jeanne Wagner found/met each other yet?!)

This book has cool illustrations by Kristin DiVona and cover art by Ilyanna Kerr! Woo, also, I am thanked in the front of this book! Neato! The book has helpful notes at the end, a works-cited list, and a foreword, which sounds scholarly, and is, but the book and notes are also often quite funny, as is Jessy Randall. You'll see! Ah, but I am schooled on this in the poem "Rachel Bodley (1831-1888)":

Stop requiring women
to be charming and delightful!
Just let us do our work.
Thank you.

But, see, even that's funny, due to the comic timing of the last line. And, to quote "Honor Fell (1900-1986)," which is partly a poem about a ferret at a wedding, "Let's agree to laugh about it while we do our work." All these women did their work, often not laughing, diligently and with obstacles, as you can imagine. The titles are their names and birth and death dates, spanning centuries. Pippa Goldschmidt's foreword tells us the word "scientist" was coined in the 1830s to describe a woman--Mary Somerville--"because the standard phrase 'man of science' was now clearly out of date." I did not know that! Racism as well as sexism impeded the careers of many of the women scientists and mathematicians in the book, but they get their say, through the voice and imagination of Jessy Randall, in fierce poems after the fact.

Also, the title, Mathematics for Ladies, which sounds dismissive, and was, actually pertains to "a new kind of math, // descriptive math, something more like / philosophy" that women practiced more in the past and men love today--abstract math, rather than applied math.

I love the caterpillars in "Maria Sibylla Merian (1647-1717)," a poem that reveals, I think, the moral superiority of Merian ("She learned art just so she could draw them") over Audubon, the painter of birds.

She drew her caterpillars from life,
never pinning them to a board.
It did not occur to her to kill them
to hold them still. They stayed still
in her mind, where it mattered.

When I found the lily
I knew it was something.
I schooled Darwin on bugs.
I'm steady. I'm plain. I write
like a woman and invite readers in.

I bet you'll feel invited in by Jessy Randall's steady, plain voice in these poems, too. Every one made me want to know more about the woman and her work!