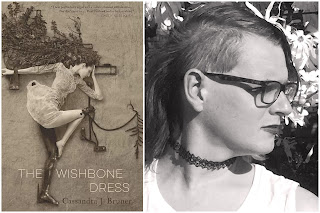 In a terrible and ironic way, The Wishbone Dress, by Cassandra J. Bruner, is, again, the perfect book to read on a Sunday, given the presence of biblical quotations and a dubious pastor within. The Wishbone Dress, published by Bull City Press, was the winner of the 2019 Frost Place Chapbook Competition, and it is a stunning book, just like its excellent cover by Jennifer Thoreson, Flora 1, from her Flora series. My husband, a painter, loves this cover, seeing the cross in it. I also love the author photo, her hair, her choker, which, one of the poems tells me, can mask the Adam's apple.

That inner narrative, of a boy named Reid, wracked by medical problems in his youth, who transforms into a woman, is told with the perfect mix of a mother's empathy and confusion in the poem, "Demeter: The Poem As My Mother." Taking on her mother's voice, the poet/speaker, I am guessing, better understands her mother and, perhaps, herself. That the poet has chosen the name Cassandra 1) thrills me, as I identify with Cassandra, too! 2) is powerful and poignant, as the ekphrastic poem "Object Lessons: After Solomon J. Solomon's Ajax and Cassandra" shows us that painting. (Here, shown via photographic reproduction thanks to Wikipedia.) This poem, partly about the rape of Cassandra by Ajax in mythology, also tells the story of the rape of a girl in a parking lot--a story told by the dubious pastor:

The preacher stresses this point
as he reads newsclippings to rows
of children. Their silence thick as gauze
over a slit eye. A creature bent toward

her destruction he calls her. Just as Solomon
paints Cassandra--straining over Ajax
toward Athena's altar, rainbowed pinions
of light pressing her against her assailant.

The preacher's "point" was to blame the victim with a detail of what she had been doing the moment before...as if to provoke/deserve the attack. We all know this old story, alas. And how powerful women are called witches, and burned. In "Cora, Bound to the Tree, Delivers Her Testimony," Cora (the Witch) says:

Go
ahead. Puncture my ankles with an iron rod & call them

pillars of onyx when they refuse to shatter. Watch my
hair flash into steel ribbons under your blades.
Make a profane miracle of me---

It's a beautiful and heartrending book. From "Of the Night":

We will kneel, unfurling
our perfumed nests of hair in offering.

Those who have been reading along in the blog re: Sealey Challenge connections will recognize the blue coincidence of "blue ribbons of humiliation" in "Poem of My Shame." Along with myth and the Bible, there is also Nature--birds and prairie, heron and milkweed. From "Apologia":

Somewhere a goshawk
descends & a pair of women

dress themselves with wishbones in separate
rooms

In my separate room, reading of another woman's separate experience, I am connected, I am bound, I am wishing...