Today's book for the Sealey Challenge is Dynamite, by Anders Carlson-Wee (Bull City Press, 2015).This one is, for real, hard-hitting, as they say, beginning, with the title poem, "Dynamite":

across his face. We're playing
a game called Dynamite

where everyting you throw
is a stick of dynamite

Imagination or reality, dream or dumpster dive, it all hurts. There's more fighting later, and a "Polaroid" to prove it. The brothers ride the rails, and one brother rides alone. Even so, and over time

You have learned very little.
But that little is what you are throwing
in the furnace. That little is stoking the dust-
coals of last year and burning something.
Burning blue. 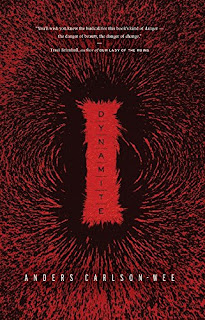 There are owls, train-related (glossary in back) or avian. There is fishing, in "The Raft," and I'm sure there was fishing earlier in this August of poetry.  And riding the train. There are guns and dust and mold, wisdom, tenderness, and "Life out of nothing." In "County 19," the speaker/poet hitchhikes by the old folks home his grandmother lived, lingers a while, then says he'll go "as far as you can take me." In another poem, he honors "Moorcroft": "You gave me a ride when I was lost in Wyoming."

Lost, but maybe found. "I've heard it said that the kingdom of heaven / surrounds us though we fail to see."